A BRIEF HISTORY OF DUELING

Dueling dates back in different forms at least 1,500 years, where matters were settled between two men through swordfights, jousts, and other means. The very first duels in Europe began around 500 A.D. with judicial duels. If a defendant in court refused to confess guilt, the plaintiff could attempt to force a confession at sword point. If he still did not confess, they could settle their difference with a sword fight. During the medieval era knights in England and Scotland would conduct chivalric duels based on a code of conduct which included rules about nobility, betrayal, adultery, sacrilege, and more. By the 1600s most duels between men were strictly related to honor. If one man dishonored another and refused to apologize either in person or publicly, they could agree to settle their difference through a duel.

The first recorded fatal duel in America took place in Boston, Massachusetts, in 1728. Two young men quarreled over a disagreement while playing cards and decided to settle their argument with a sword fight, in which one was fatally stabbed. Dueling in America during the 18th and early 19th centuries was quite common (even DeWitt Clinton injured an opponent in a duel in 1802 before he became governor of New York), and although many disapproved of the activity there were very few colonies or states which adopted any serious laws against it. In fact, after the California Gold Rush began in 1848, dueling in San Francisco became so common and popular that newspapers would advertise upcoming duels like public performances. However, dueling finally fell out of favor after the Civil War in the 1860s and by the turn of the century had largely become a thing of the past across America.

Dueling was considered a way to settle differences among gentlemen of honor, and therefore required a code of conduct. A ‘Code Duello’ was not a law like a government would pass, but instead a set of basic rules that gentlemen would agree to follow when preparing for a duel.  These rules were written by various people from the Renaissance through the 19th century, but in general the rules during the early 19th century included the following:

Please click the link below to watch this PBS video which recreates the conditions of the duel between Alexander Hamilton and Aaron Burr.

AFTERMATH OF THE HAMILTON/BURR DUEL 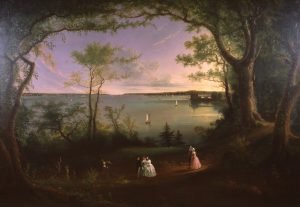 After the duel on the morning of July 11, 1804, Alexander Hamilton was rowed back to Manhattan where he died the following day. His wife Elizabeth Schuyler Hamilton and their seven children were by his side. He was buried at Trinity Church in lower Manhattan. This was the family’s second loss to a duel; their son Philip died defending his father’s honor three years earlier. As Hamilton had moral concerns about dueling, it is suspected that he purposely shot wide, although this has never been proven.

Burr was charged with murder in New Jersey and New York, but as vice president of United States he enjoyed immunity from prosecution in Washington, D.C. After his term of office expired, Burr looked to the Louisiana Territory to revive his political aspirations. He conspired with James Wilkinson, commander-in-chief of the U.S. Army and governor of the Northern Louisiana Territory, to conquer parts of Louisiana and Mexico and crown himself emperor. The attempt failed, and in 1807 Burr was captured and tried for treason. He was acquitted on a technicality and, facing public condemnation, he fled to Europe. While in Europe he again unsuccessfully plotted to take territory in North America, eventually returning to the United States a fugitive from debtors’ prison. Burr’s murder charges were dropped, and he resumed the practice of law in New York City. He died at the age of 80, a nearly forgotten man.

Hamilton has been honored through monuments, place and school names, on currency, in literature, and most recently at the theater. Hamilton, a visionary who believed in a strong central government with an active executive branch, was instrumental in engineering the modern liberal capitalist economy. His most enduring legacy are The Federalist Papers, which remain highly influential in constitutional studies and court decisions.