In June 1804 Aaron Burr and Alexander Hamilton, both living in New York City, began a correspondence in which Burr attempted to investigate a supposed comment Hamilton made about him at a dinner party. This series of letters ultimately led to the duel on July 11 which ended Hamilton’s life.

Click on the image of each letter below to see a larger version and a transcription. 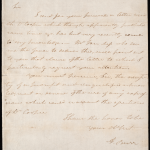 In this brief letter Aaron Burr is requesting that Alexander Hamilton explain a comment he supposedly made during a dinner party, according to Charles D. Cooper. Cooper, who attended the dinner, stated in a letter that Hamilton had called Burr a ‘dangerous man’ and that he could also state a ‘still more despicable opinion’ that Hamilton had said about him. Burr acquired a copy of this letter and wanted Hamilton to answer what the ‘more despicable opinion’ was.

In Hamilton’s response to Aaron Burr’s first letter, he states that there is no way for him to answer Burr’s question about a ‘more despicable opinion’ that he supposedly said about him, without more detailed information. He calls Burr’s request an ‘embarrassment’ and recommends that Burr either provide more details or drop the subject entirely. 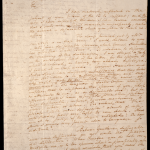 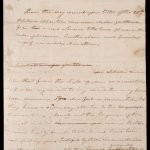 In this draft of a letter, Burr finds Hamilton’s response insufficient. He believes that negative opinions were said about him, and squarely puts the responsibility on Hamilton for revealing what they were. Burr compares the word ‘despicable’ to ‘dishonor,’ which is important because duels were commonly fought when one or both parties felt dishonored. Burr asks Hamilton again for more details on what he said, and the final sentence of the letter is the first reference to a duel when Burr speaks of the ‘only alternative which the circumstances of the case will justify.’ Burr removed this comment from the final draft of his letter, perhaps because he believed it to be too direct.

Once again, Hamilton refuses to answer Burr’s question. He calls Burr’s previous letter ‘indecorous and improper,’ and states that the letter has made it even more difficult for Hamilton to respond. This is the final letter directly between Hamilton and Burr. After this, they correspond solely through their ‘seconds,’ Nathaniel Pendleton and William Van Ness. 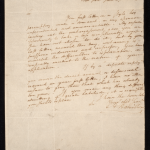 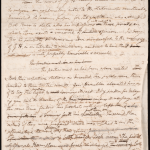 On July 16, 1804, William Van Ness, Aaron Burr’s second during the duel, wrote a letter for the press disputing some of the points made in the official statement which was drafted mostly by Nathaniel Pendleton regarding the events of the duel. Van Ness states that Hamilton shot first, whereas Pendleton stated that it was unclear. In the letter, “G.H.” refers to General Hamilton.

Photographs of letters by Richard Walker.

To view the full gallery of letters, click here.

If you would like to hear dramatic readings of portions of the letters written by Hamilton and Burr, click the media players below.

The first two letters between Aaron Burr and Alexander Hamilton:

The last two letters (Burr’s first draft and Hamilton’s final draft) between Burr and Hamilton before they began corresponding via their ‘seconds’: