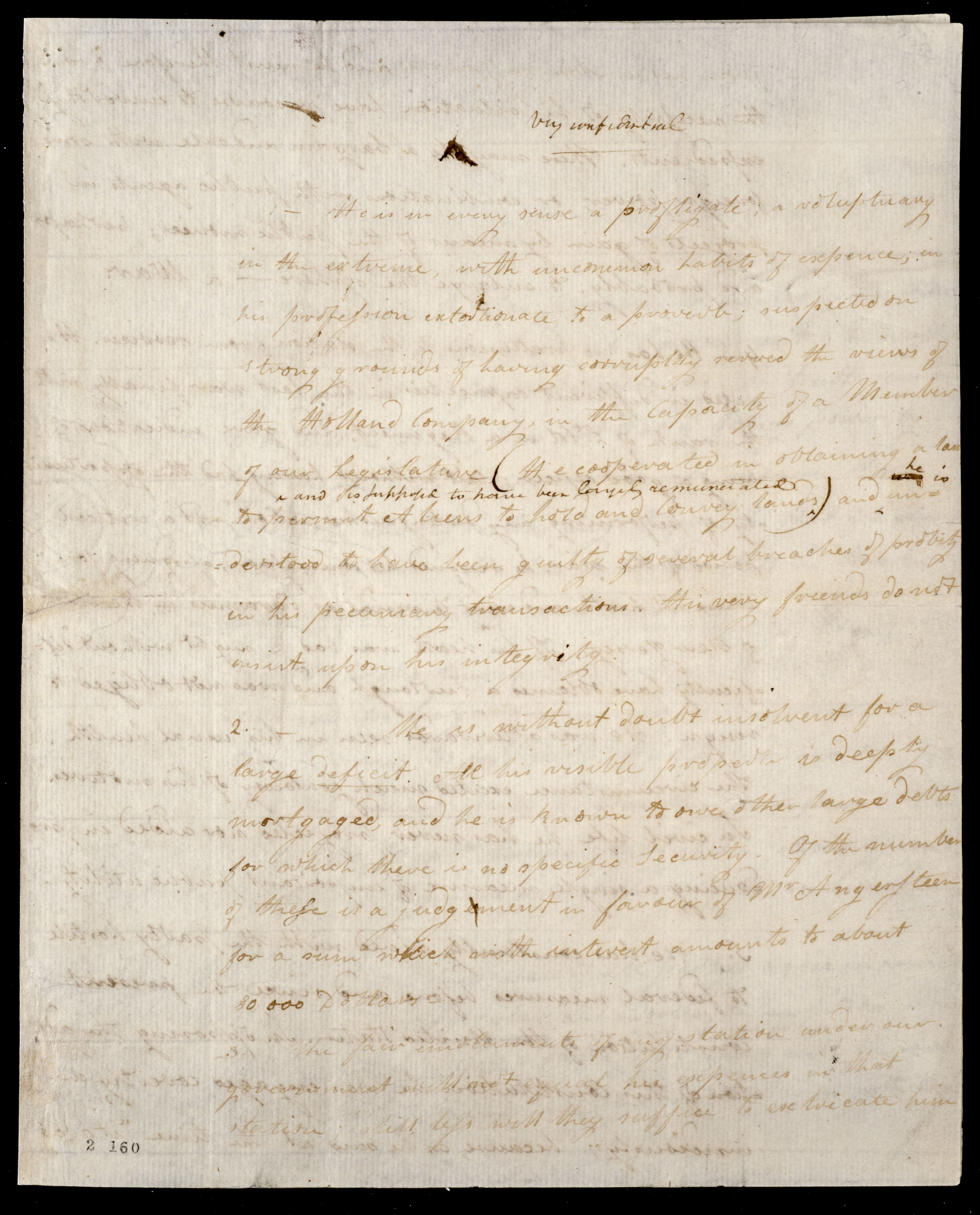 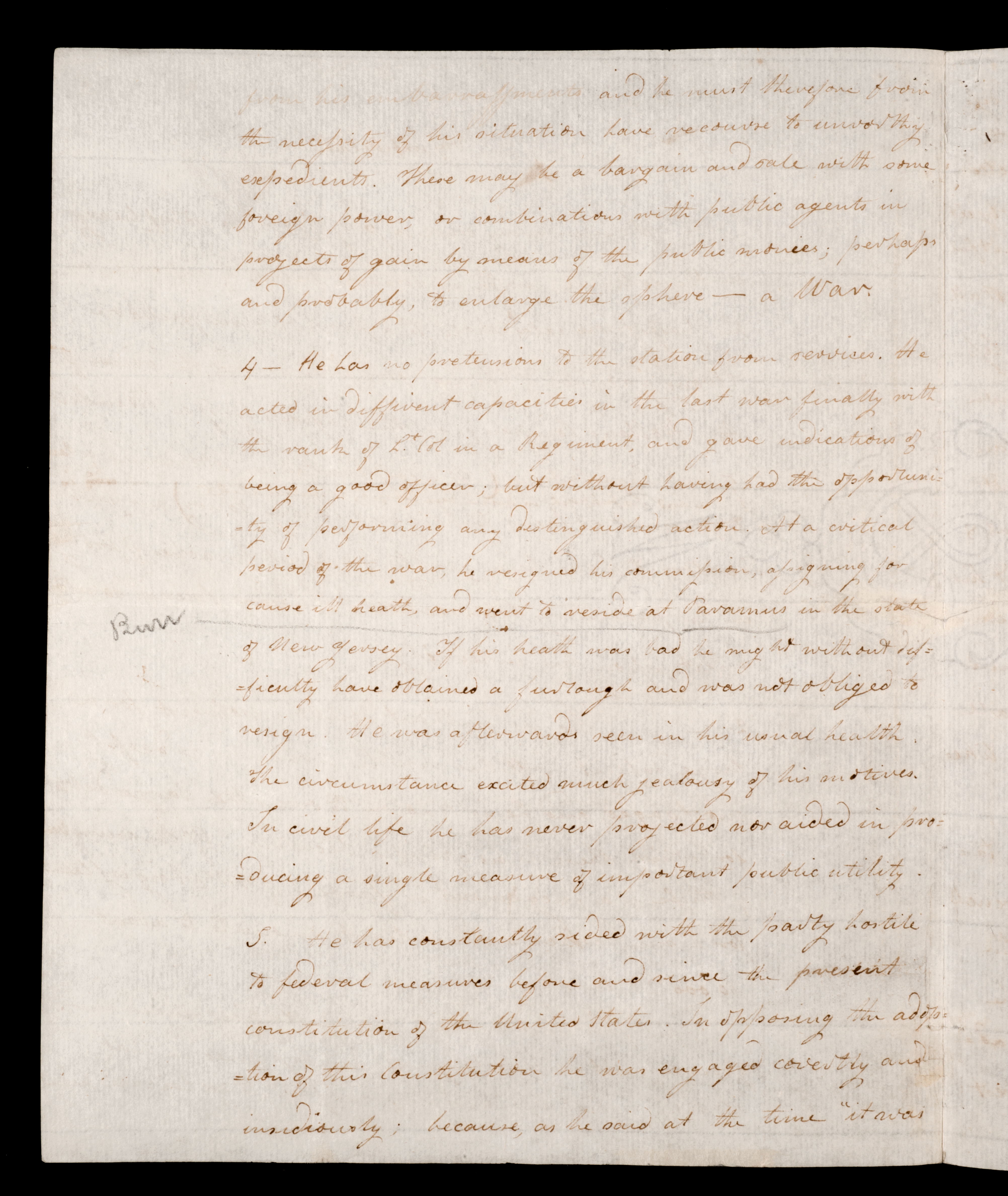 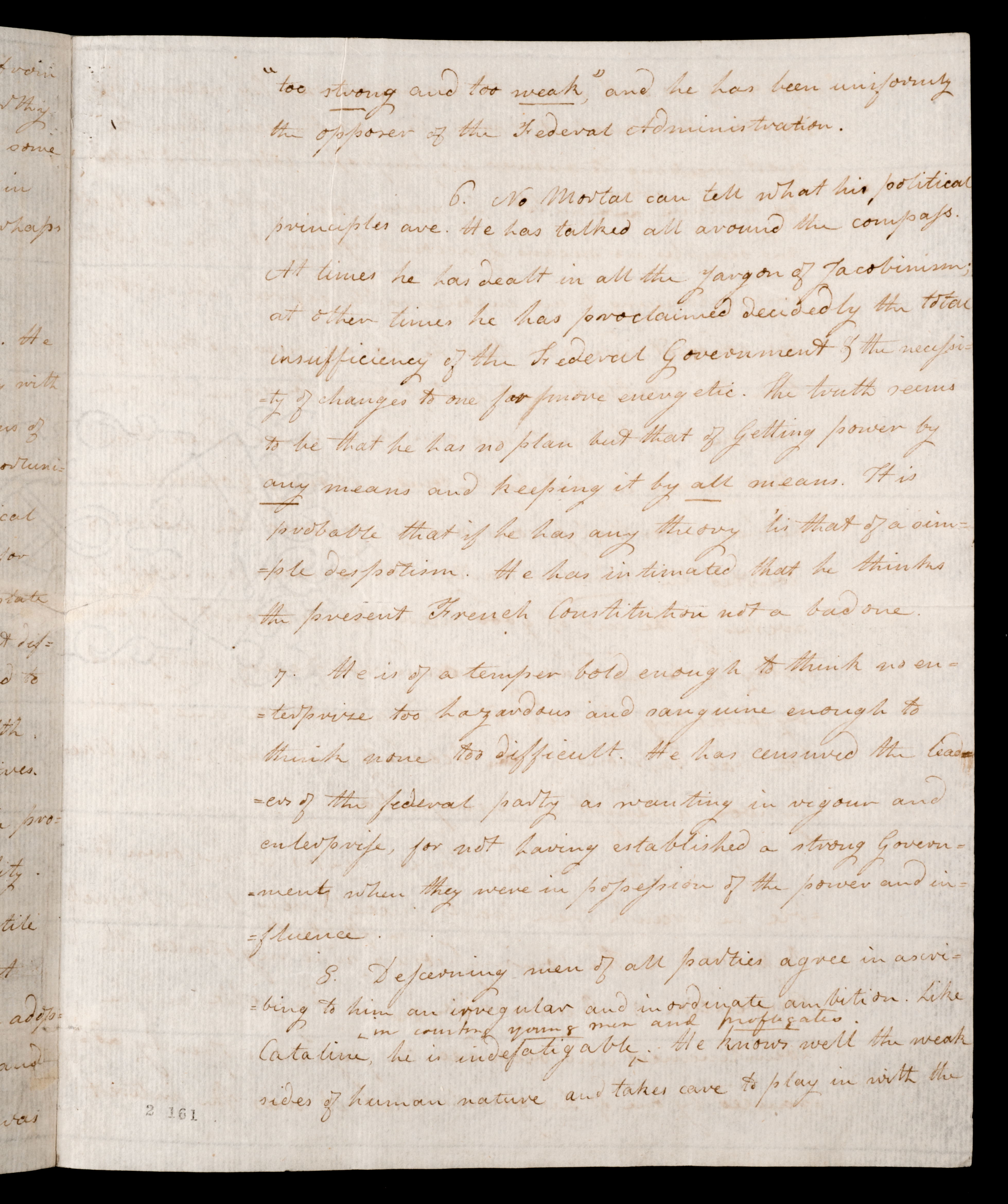 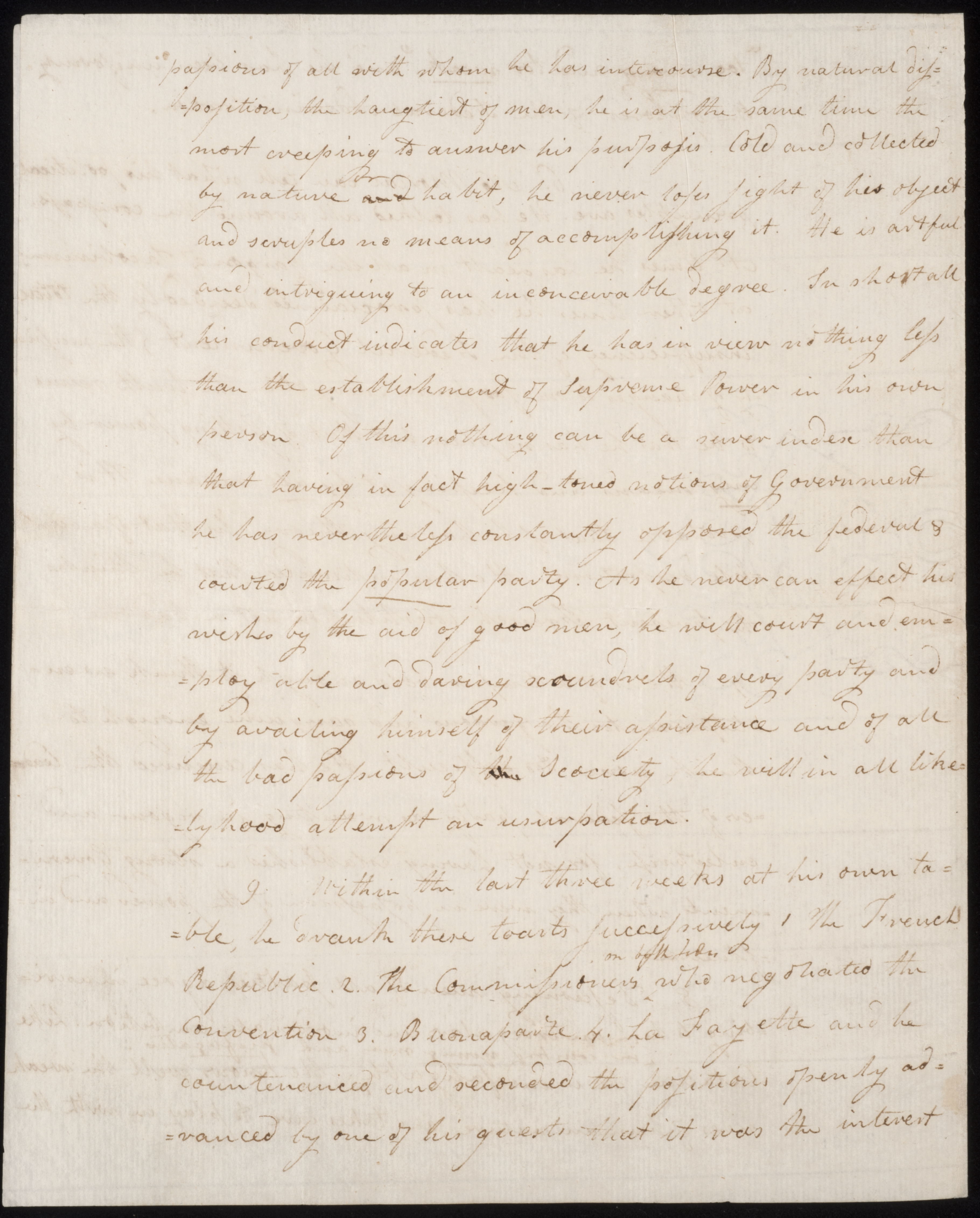 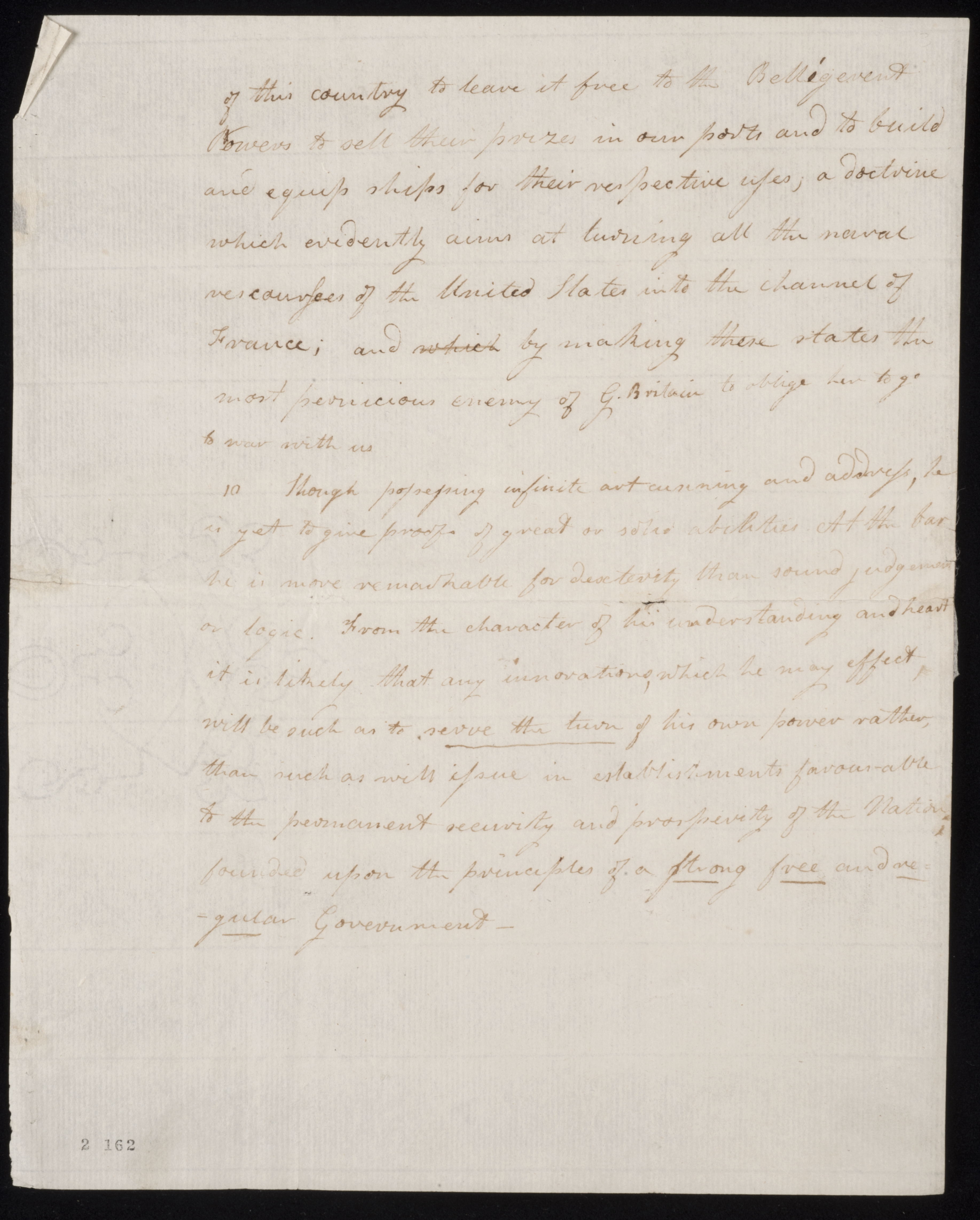 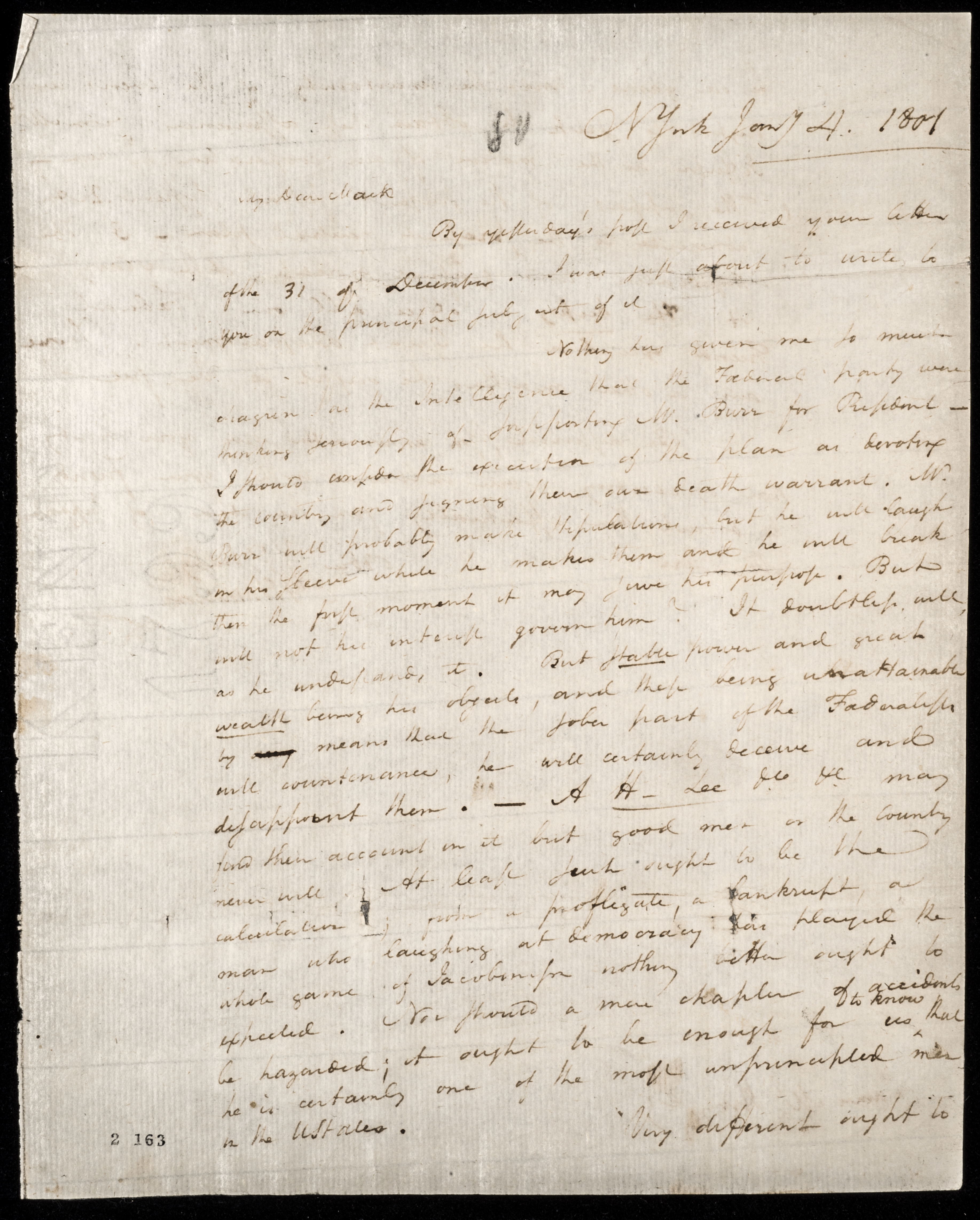 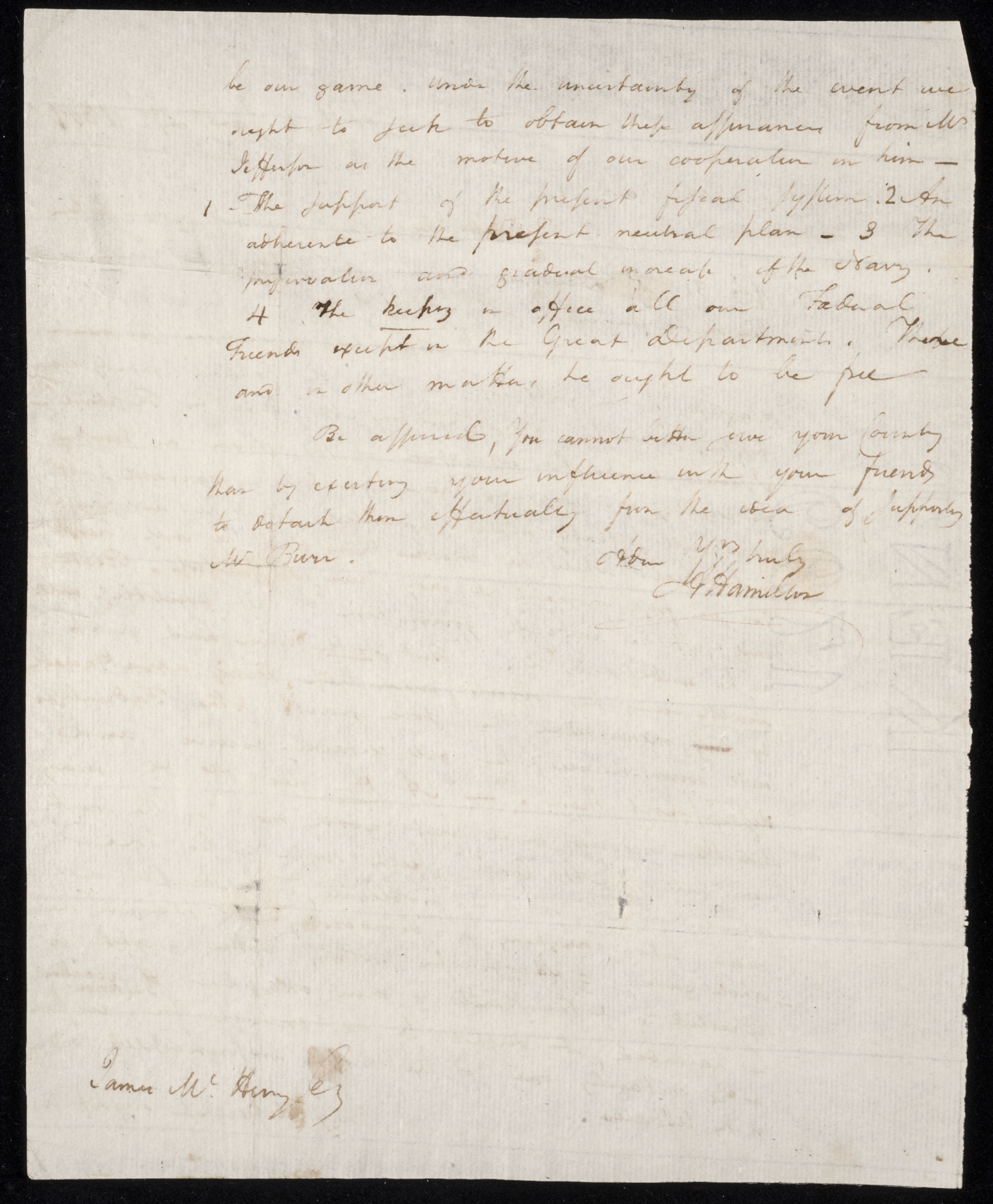 I was at Albany when your letter got here. I have snatched the full hour from my avocation to sketch to you my thoughts in a rude shape.

By yesterday’s post I received your letter of the 31 of December. I was just about to write to you on the principal subject of it.

Nothing has given me so much chagrin on the Intelligence that the Federalist party were thinking seriously of supporting Mr. Burr for President– I should consider the execution of the plan as devoting the country and signing them our death warrant. Mr. Burr will probably make stipulations but he will laugh in his sleeve while he makes them and he will break them the first moment it may serve his purpose. But will not his interest govern him? It doubtless will, as he understands it. But stable power and great wealth being his objects, and these being unattainable by means that the sober part of the Federalists will countenance, he will certainly deceive and disappoint them. A H – Lee etc., etc. may find their account in it but good men or the Country never will. At least such ought to be the calculation; from a profligate, a bankrupt, a man who laughing at democracy has played the whole game of Jacobinism nothing better ought to be expected. Nor should a mere chapter of accidents be hazarded; it ought to be enough for us to know that he is certainly one of the most unprincipled men in the U. States.

Very different ought to be our game. Under the uncertainty of the event we ought to seek to obtain these assurances from Mr. Jefferson as the motive of our cooperation in him – 1 The support of the present fiscal system. 2 An adherence to the present neutral plan – 3 The preservation and gradual increase of the Navy. 4 The keeping in office all our Federal Friends except in the Great Departments. These and in other matters he ought to be free.

Be assured, you cannot better serve your Country than by exerting your influence with your friends to detach them effectually from the idea of supporting Mr. Burr.

1- He is in every sense a profligate, a voluptuary in the extreme, with uncommon habits of expence; in his profession extortionate to a proverb; suspected on strong grounds of having corruptly served the views of the Holland Company, in the Capacity of a Member of our Legislature (He cooperated in obtaining a law to permit Aliens to hold and convey lands and he is supposed to have been largely remunerated) and he is understood to have been guilty of several breaches of probity in his pecuniary transactions. His very friends do not insist upon his integrity.

2- He is without doubt insolvent for a large deficit. All his visible property is deeply mortgaged, and he is known to owe other large debts for which there is no specific Security. Of the number of these is a judgement in favour of Mr. Angersteen for a sum which with interest amounts to about 80,000 Dollars­.

3- The fair emoluments of any station under our government will not equal his expenses in that station; still less will they suffice to extricate him from his embarrassments and he must therefore from the necessity of his situation have recourse to unworthy expedients. There may be a bargain and sale with some foreign power, or combinations with public agents in projects of gain by means of the public monies; perhaps and probably, to enlarge the sphere– a War.

4- He has no pretensions to the station from services. He acted in different capacities in the last war finally with the rank of Lt. Col in a Regiment, and gave indications of being a good officer; but without having had the opportunity of performing any distinguished action. At a critical period of the war, he resigned his commission, assigning for cause ill health, and went to reside at Paramus in the state of New Jersey. If his health was bad he might without difficulty have obtained furlough and was not obliged to resign. He was afterwards seen in his usual health. The circumstances excited much jealousy of his motives. In civil life he has never projected nor aided in producing a single measure of important public utility.