34. Letter by Alexander Hamilton to Aaron Burr, copy of letter #2, in handwriting of Van Ness 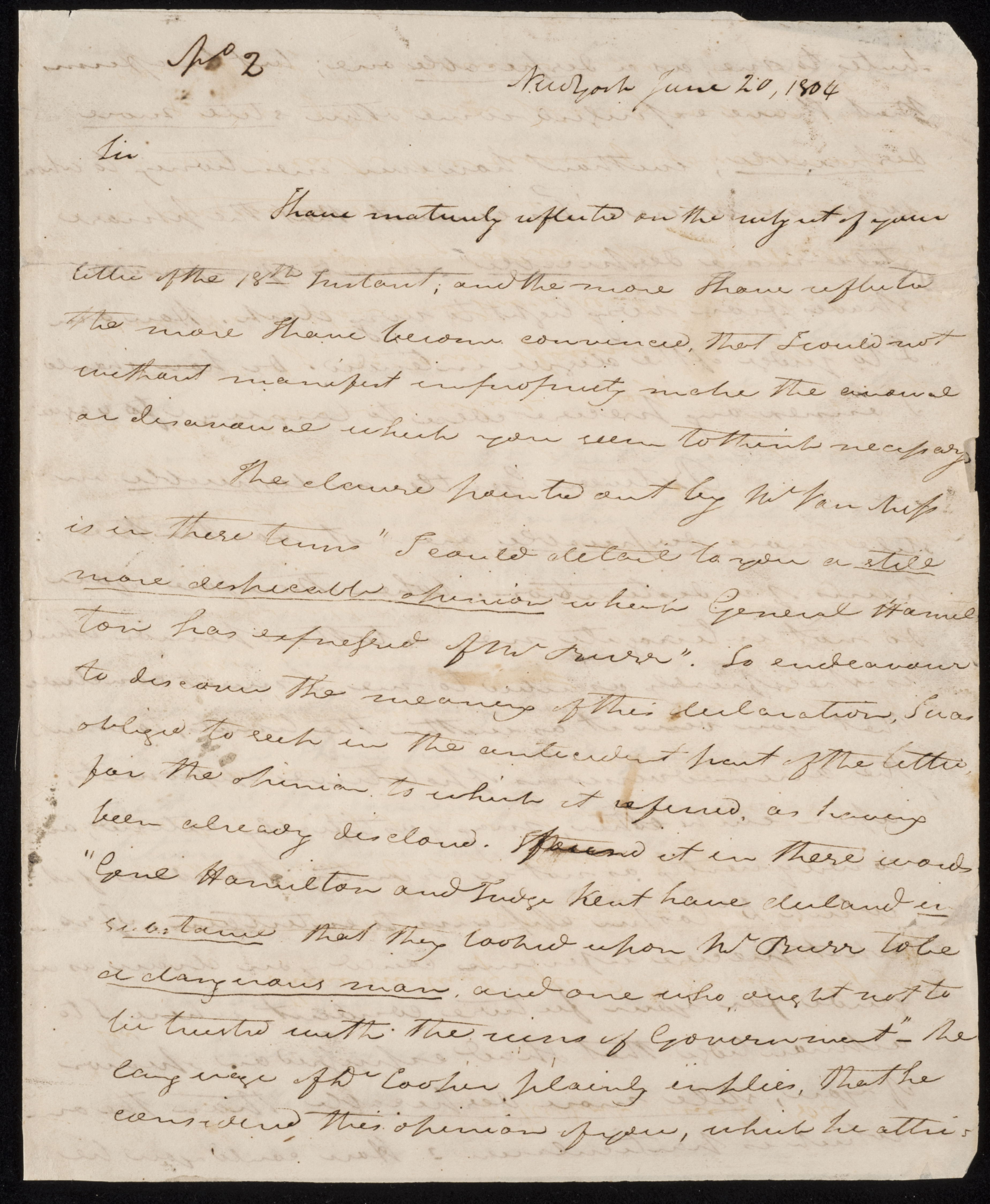 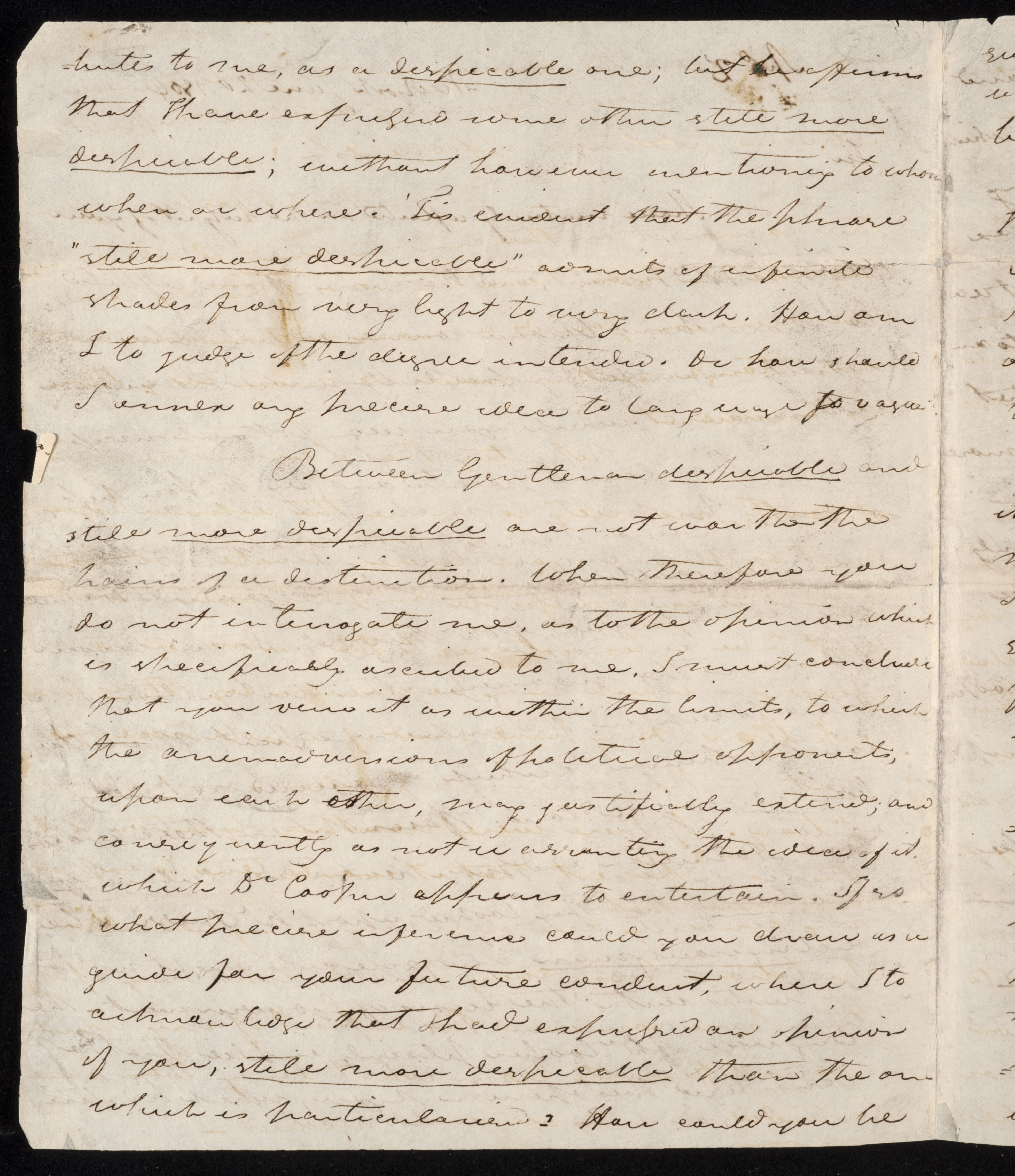 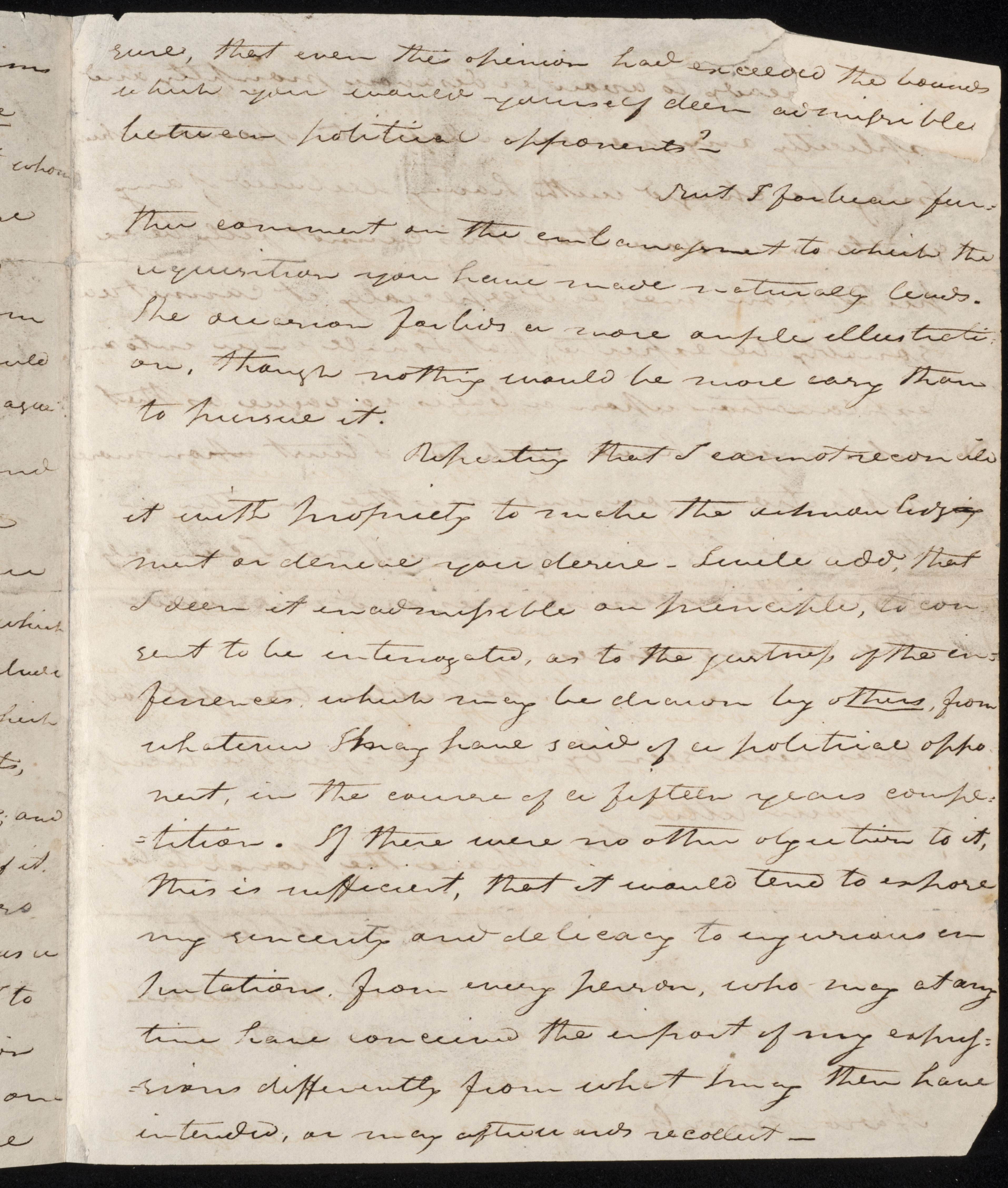 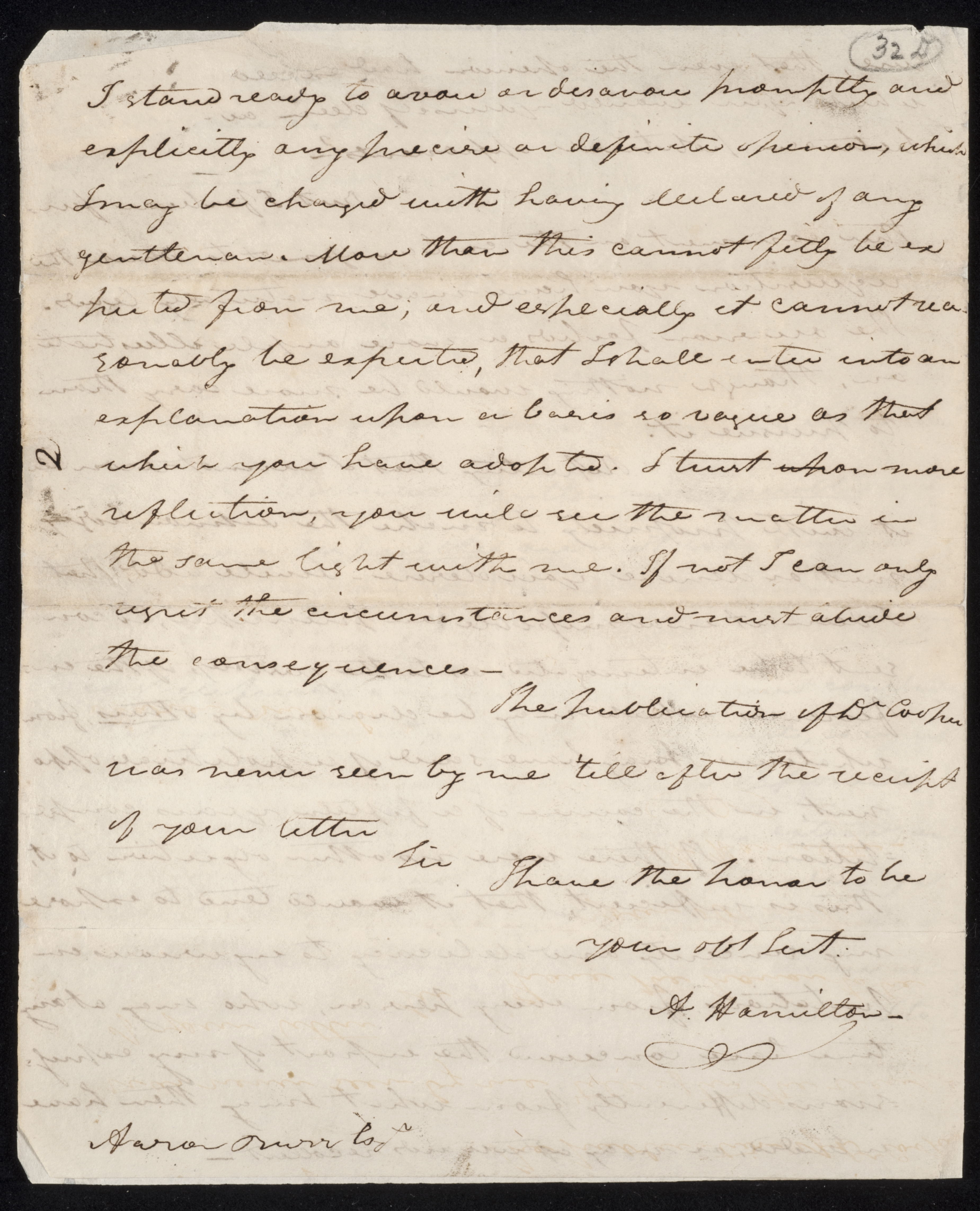 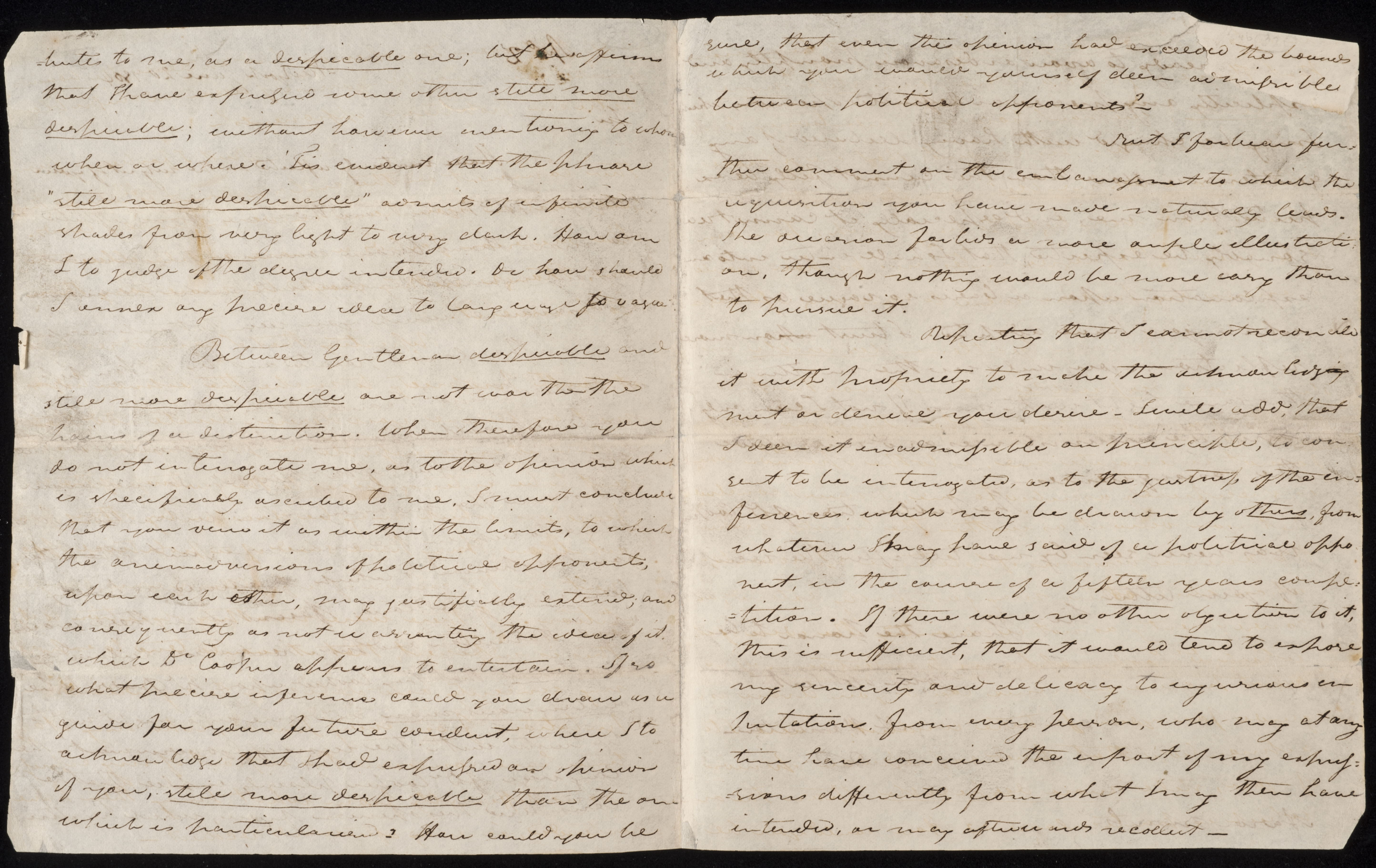 I have maturely reflected on the subject of your letter of the 18th Instant, and the more I have reflected, the more I have become convinced that I could not without manifest impropriety make the avowal or disavowal which you seem to think necessary.

The clause pointed out by Mr. Van Ness is in these terms: “I could detail to you a still more despicable opinion which General Hamilton has expressed of Mr. Burr.” To endeavor to discover the meaning of this declaration, I was obliged to seek in the antecedent part of the letter for the opinion to which it referred, as having been already disclosed. I found it in these words: “Genl. Hamilton and Judge Kent have declared in substance that they looked upon Mr. Burr to be a dangerous man, and one who ought not to be trusted with the reins of Government.” The language of Dr. Cooper plainly implies that he considered this opinion of you, which he attributes to me, as a despicable one; but he affirms that I have expressed some other still more despicable; without, however mentioning to whom, when or where. ‘Tis evident that the phrase “still more despicable” admits of infinite shades from very light to very dark. How am I to judge of the degree intended. Or how should I annex any precise idea to language so vague?

Between Gentlemen despicable and still more despicable are not worth the pains of a distinction. When, therefore, you do not interrogate me as to the opinion which is specifically ascribed to me, I must conclude that you view it as within the limits to which the animadversions of political opponents, upon each other, may justifiably extend; and consequently as not warranting the idea of it which Dr. Cooper appears to entertain. If so, what precise inference could you draw as a guide for your future conduct, were I to acknowledge that I had expressed an opinion of you, still more despicable than the one which is particularized? How could you be sure that even this opinion had exceeded the bounds which you would yourself deem admissible between political opponents?

But I forbear further comment on the embarrassment to which the requisition you have made naturally leads. The occasion forbids a more ample illustration, though nothing would be more easy than to pursue it.

Repeating that I cannot reconcile it with propriety to make the acknowledgement or denial you desire, I will add that I deem it inadmissible on principle, to consent to be interrogated as to the justness of the inferences which may be drawn by others, from whatever I may have said of a political opponent in the course of a fifteen years competition. If there were no other objection to it, this is sufficient, that it would tend to expose my sincerity and delicacy to injurious imputations from every person who may at any time have conceived that import of my expressions differently from what I may then have intended, or may afterwards recollect.

I stand ready to avow or disavow promptly and explicitly any precise or definite opinion which I may be charged with having declared of any gentleman. More than this cannot fitly be expected from me; and especially it cannot reasonably be expected that I shall enter into an explanation upon a basis so vague as that which you have adopted. I trust upon more reflection you will see the matter in the same light with me. If not, I can only regret the circumstances and must abide the consequences.

The publication of Dr. Cooper was never seen by me ‘till after the receipt of your letter.

Sir, I have the honor to be