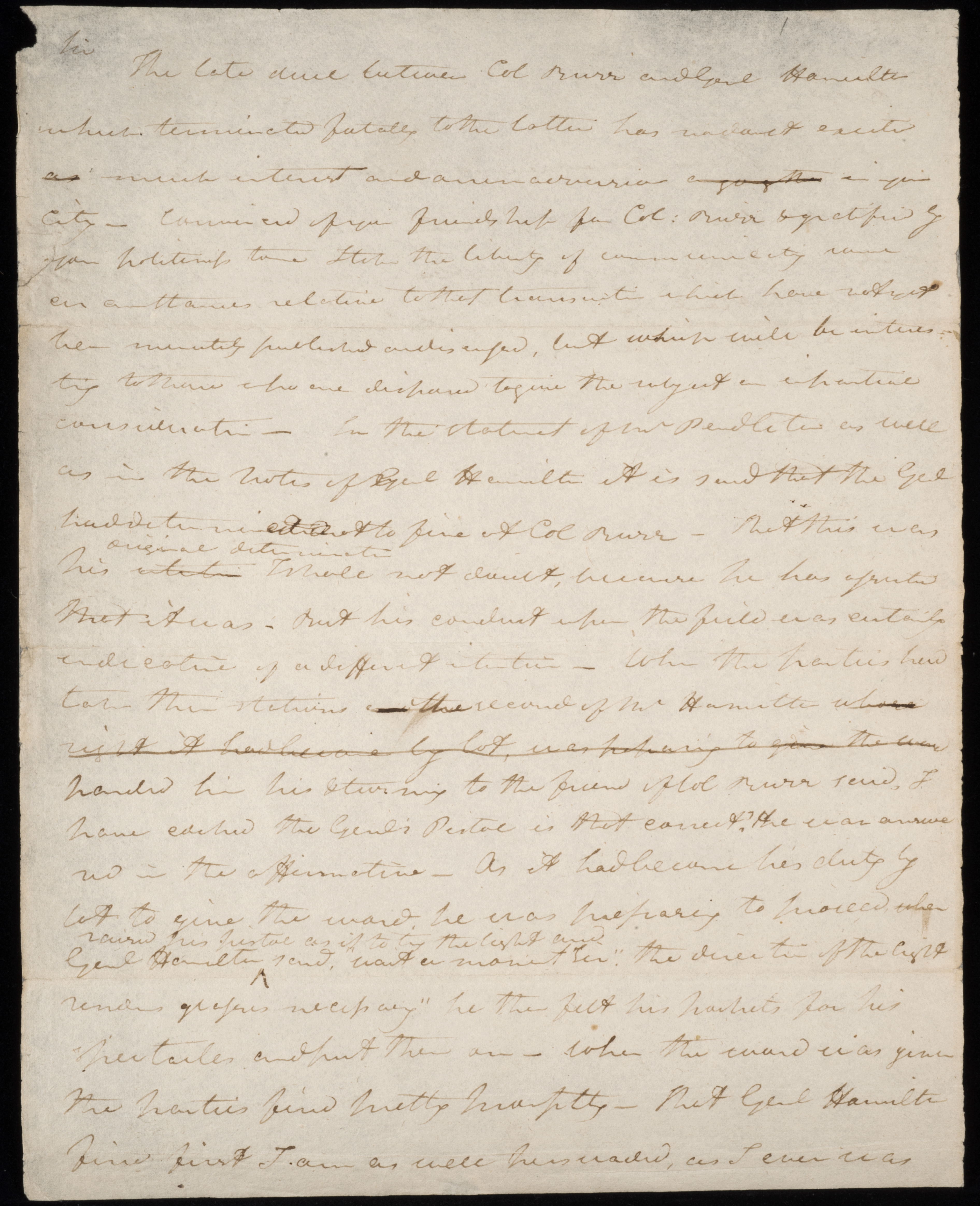 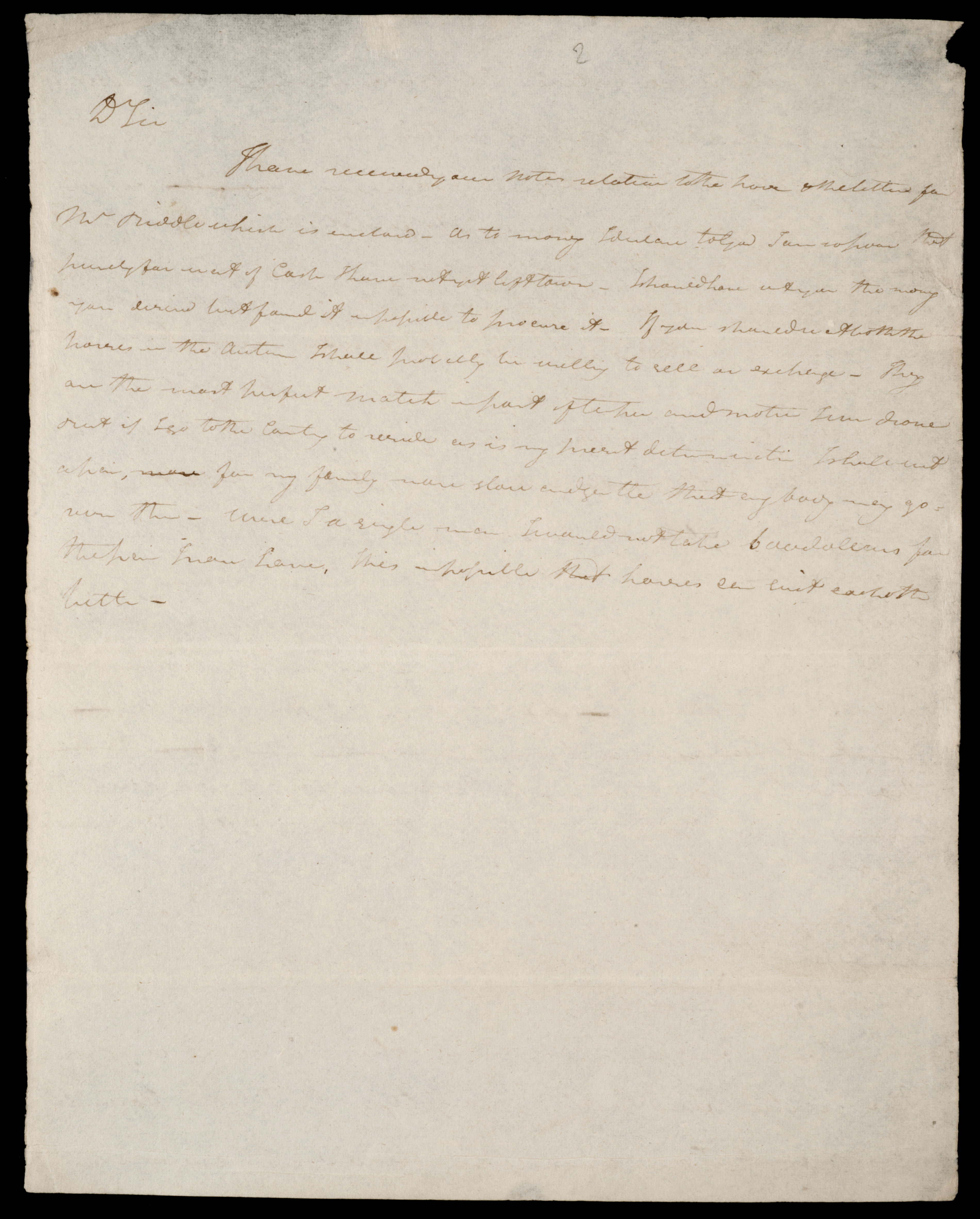 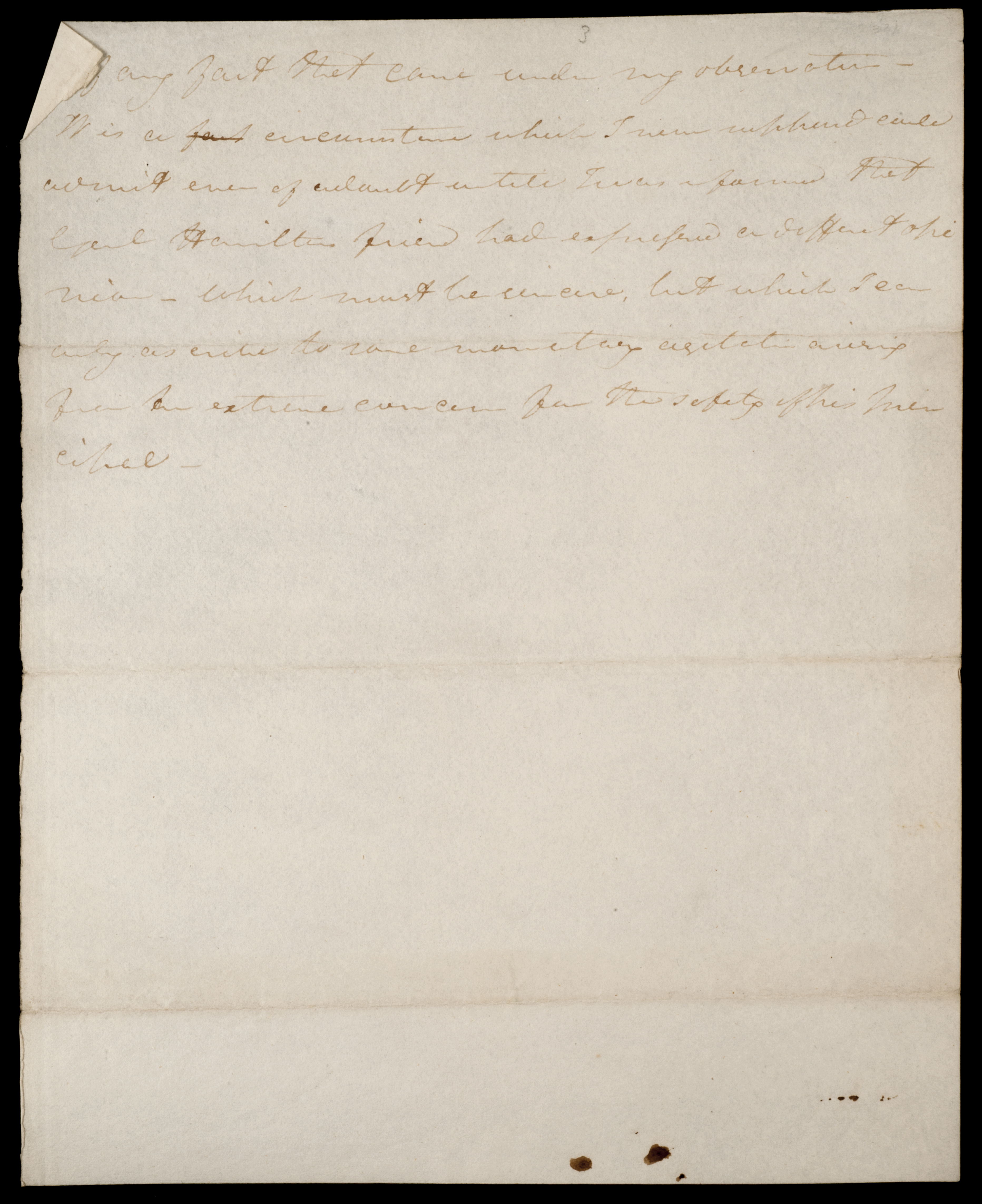 The late duel between Col. Burr and Genl. Hmailton which terminated fatally to the latter has no doubt excited much interest and animadversion in your city. Convinced of you friendship for Col. Burr & gratified by your politeness to me, I take the liberty of communicating some circumstances relative to that transaction which have not yet been minutely published or discussed, but which will be interesting to those who are disposed to give the subject an impartial consideration. In the statement of Mr. Pendleton as well as in the notes of Genl. Hamilton, it is said that the Genl. had determined not to fire at Col. Burr. That this was his original determination, I shall not doubt, because he has asserted that it was. But his conduct upong the field was entirely
indicative of a different intention. When the parties had taken their stations, the second of Mr. Hamilton handed him his & turning to the firend of Col. Burr said I have cocked the Genl’s Pistol; is that correct? He answered in the affirmative. As it had become his duty by lot to give the word, he was preparing to proceed when Genl. Hamilton raised his pistol as if to try the light and said, “Wait a moment, sir, the direction of the light renders glasses necessary.” He then felt his pockets for his spectacles and put them on. When the word was given, the parties fired pretty promptly. That Genl. Hamilton fired first, I am as well persuaded as I ever was of any fact that came under my observation. It is a circumstance which I never supposed could admit even of a doubt until I was informed that Genl. Hamilton’s friend had expressed a different opinion, which must be sincere, but which I can only ascribe to some momentary agitation arising from his extreme concern for the safety of his principal.

I have received your notes relative to the horses & the letter for Mr. Biddle, which is enclosed. As to money, I declare to God I am so poor that purely for want of cash I have not yet left town. I should have sent you the money you desired, but found it impossible to procure it. If you should want both horses in the autumn, I shall probably be will to sell or exchange. They are the most perfect match in point of temper and motion I ever drove. But if I go to the country to reside, as is my present determination, I shall want a pair, for my family move and gentle that anybody may govern them. Were I a single man, I would not take six hundrer dollars for the pair I now have. It is impossible that horses can suit each other better.