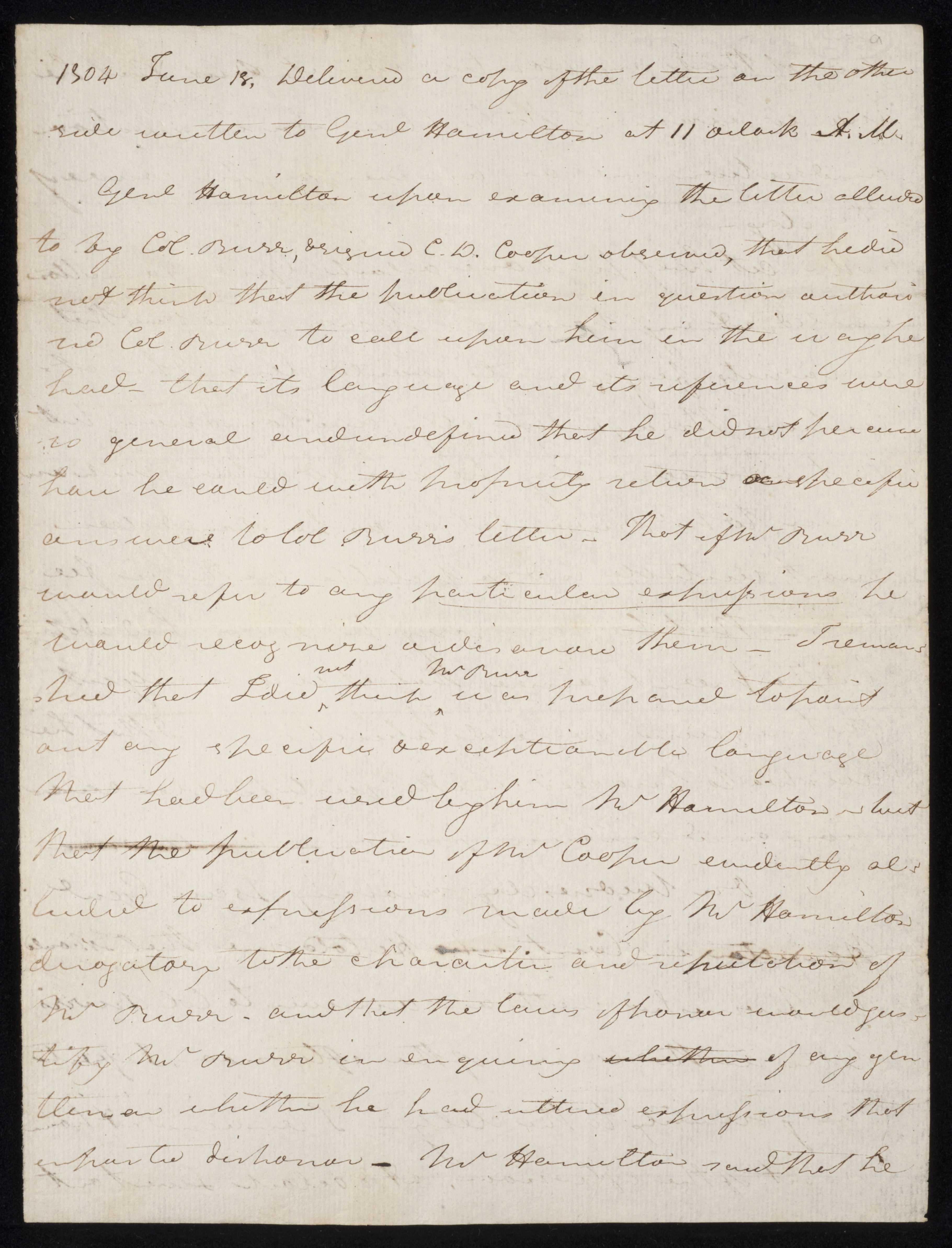 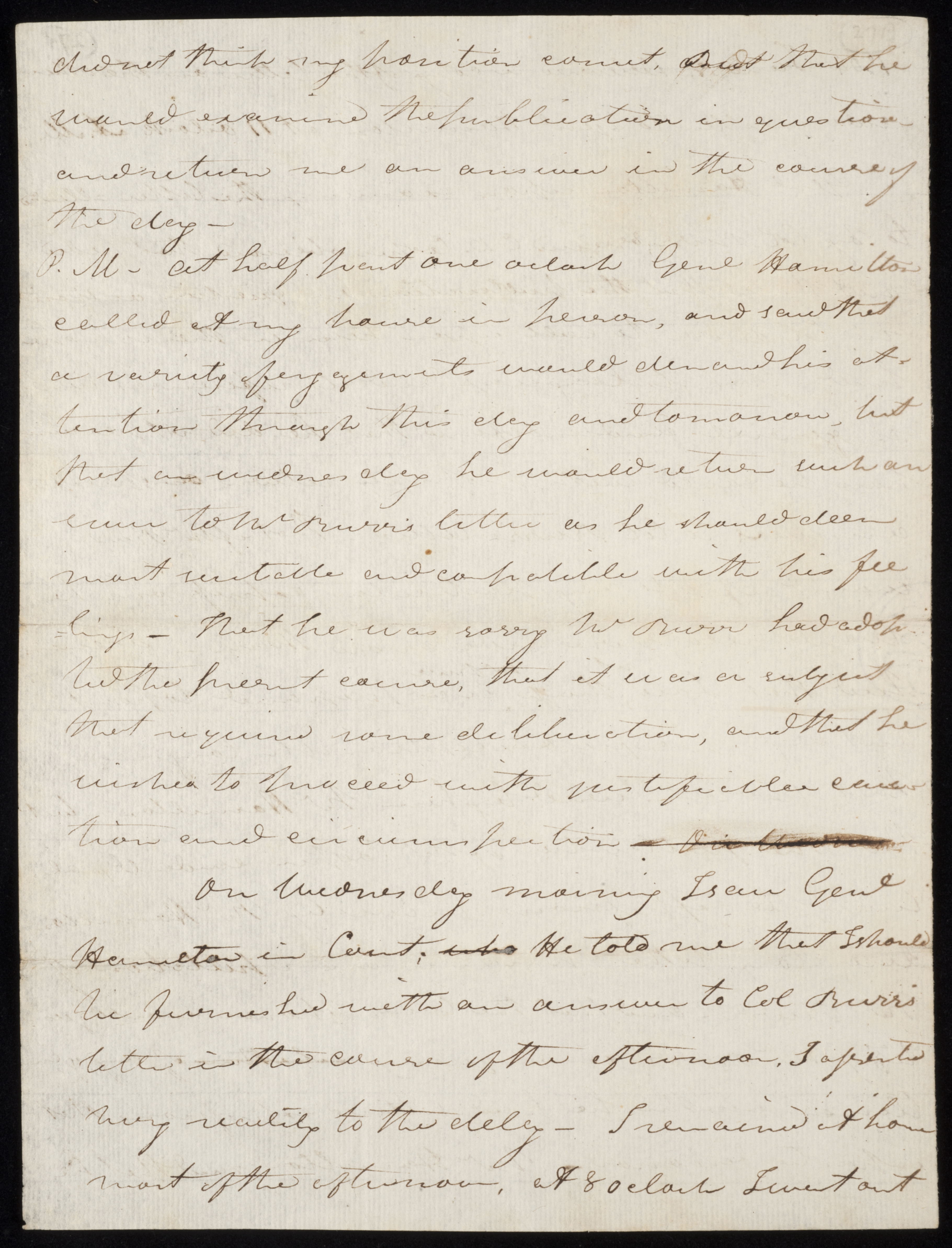 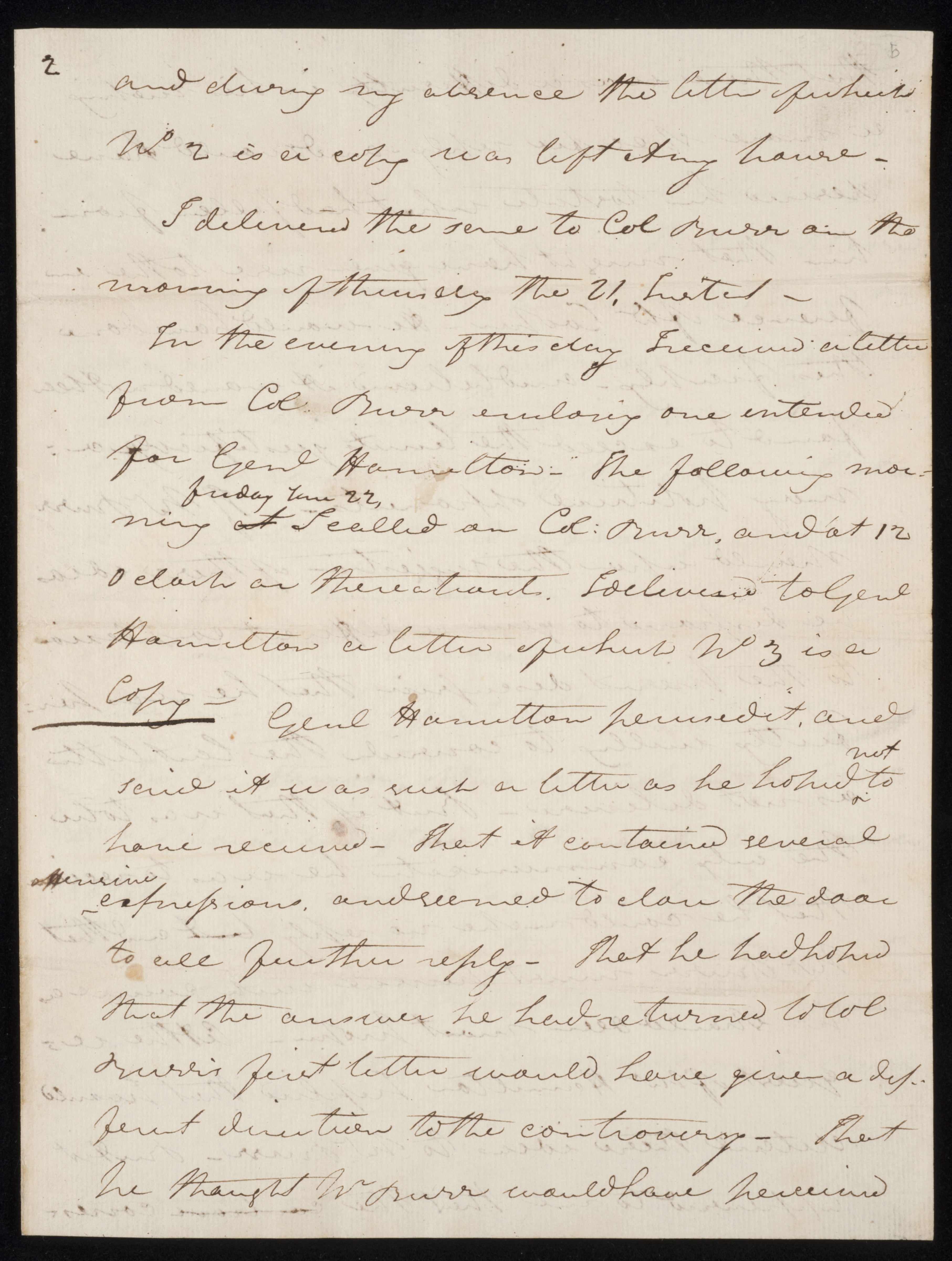 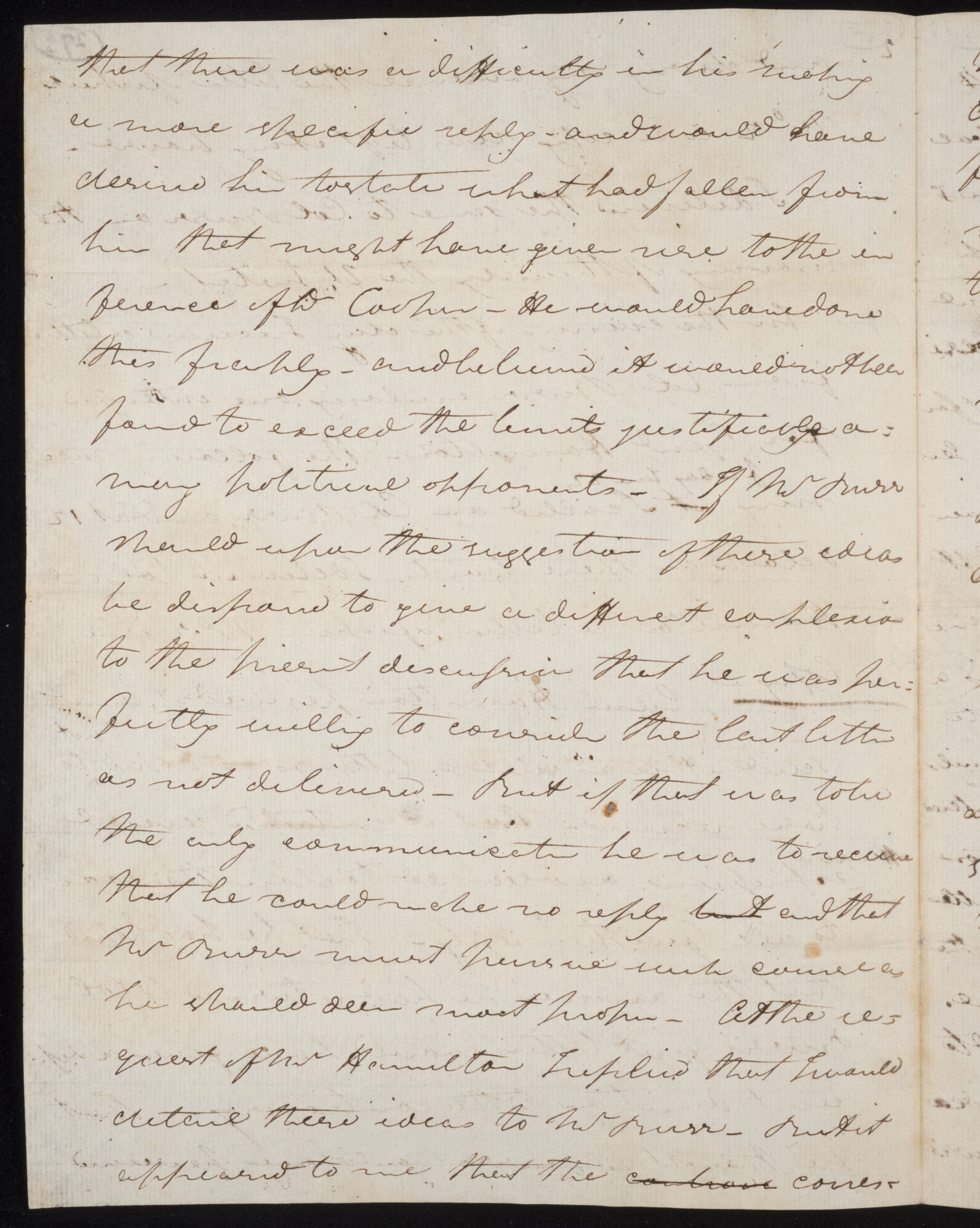 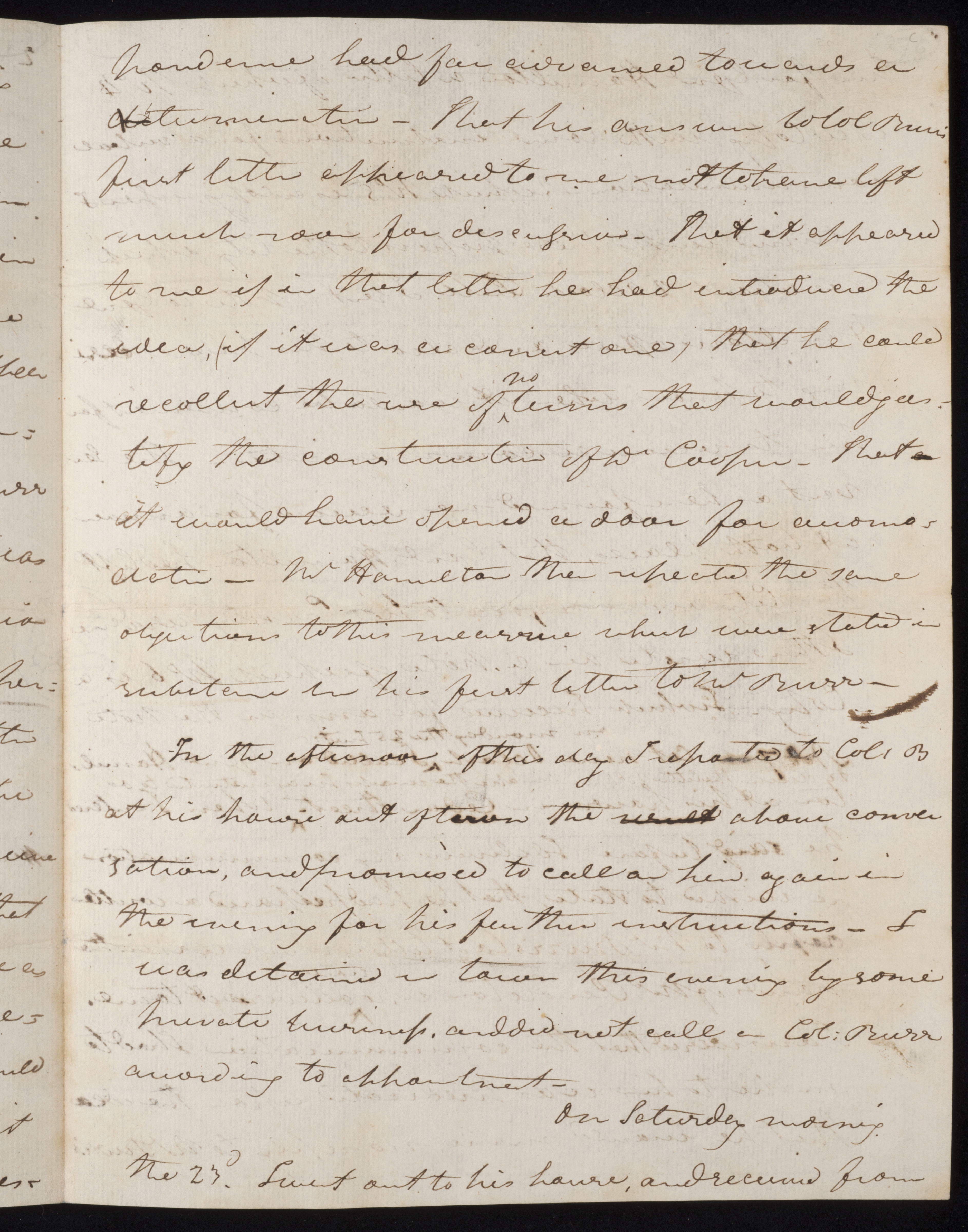 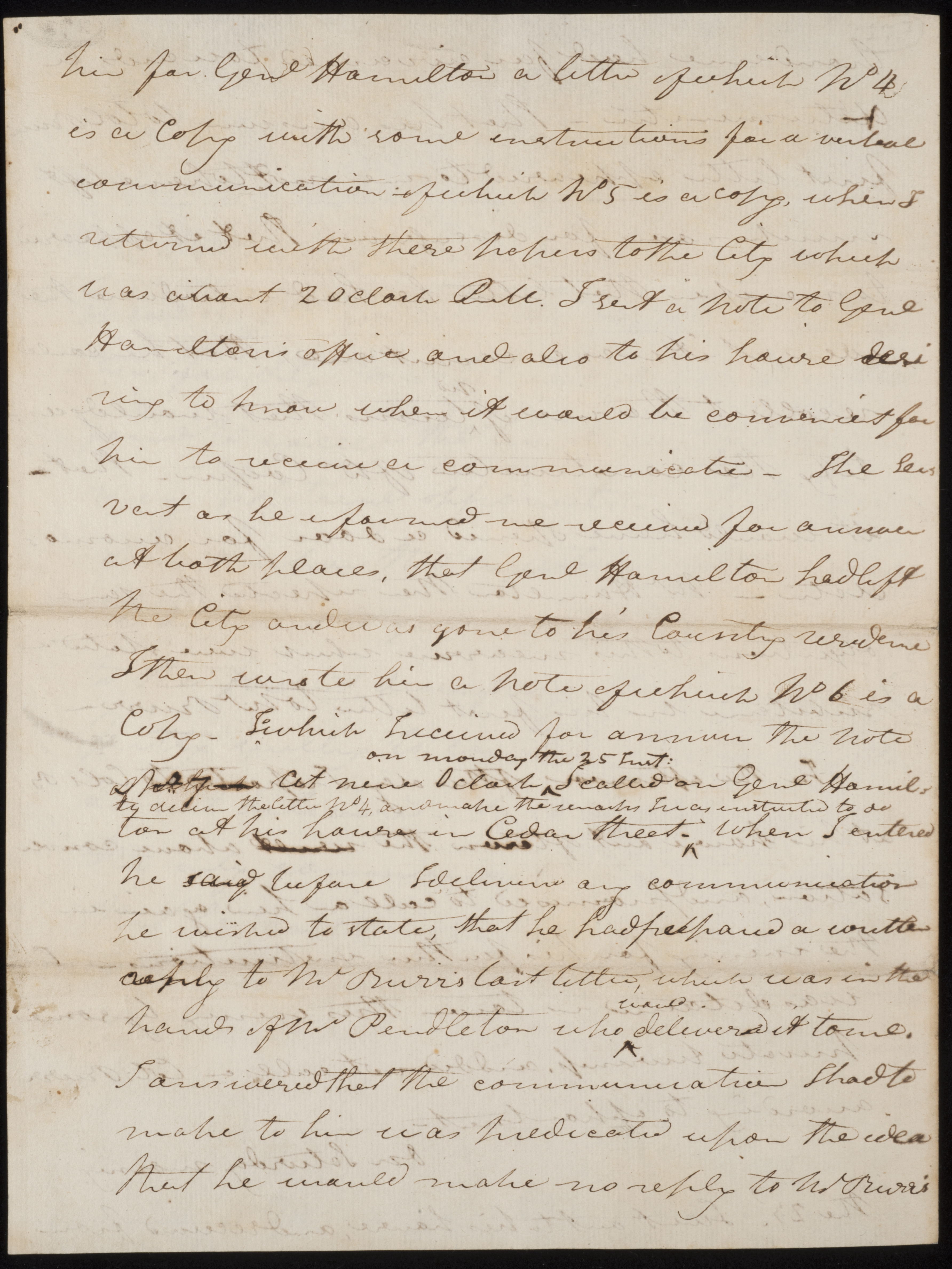 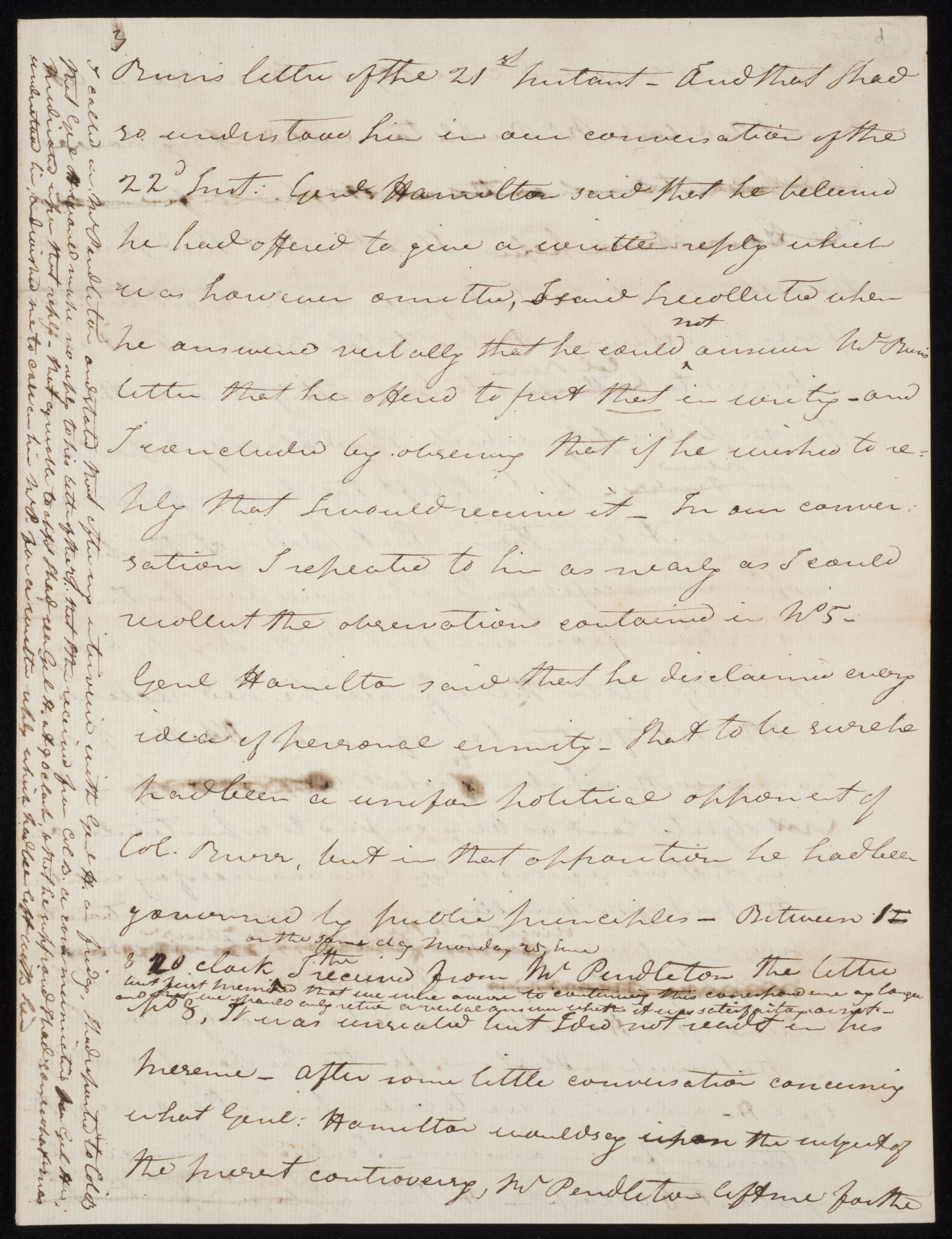 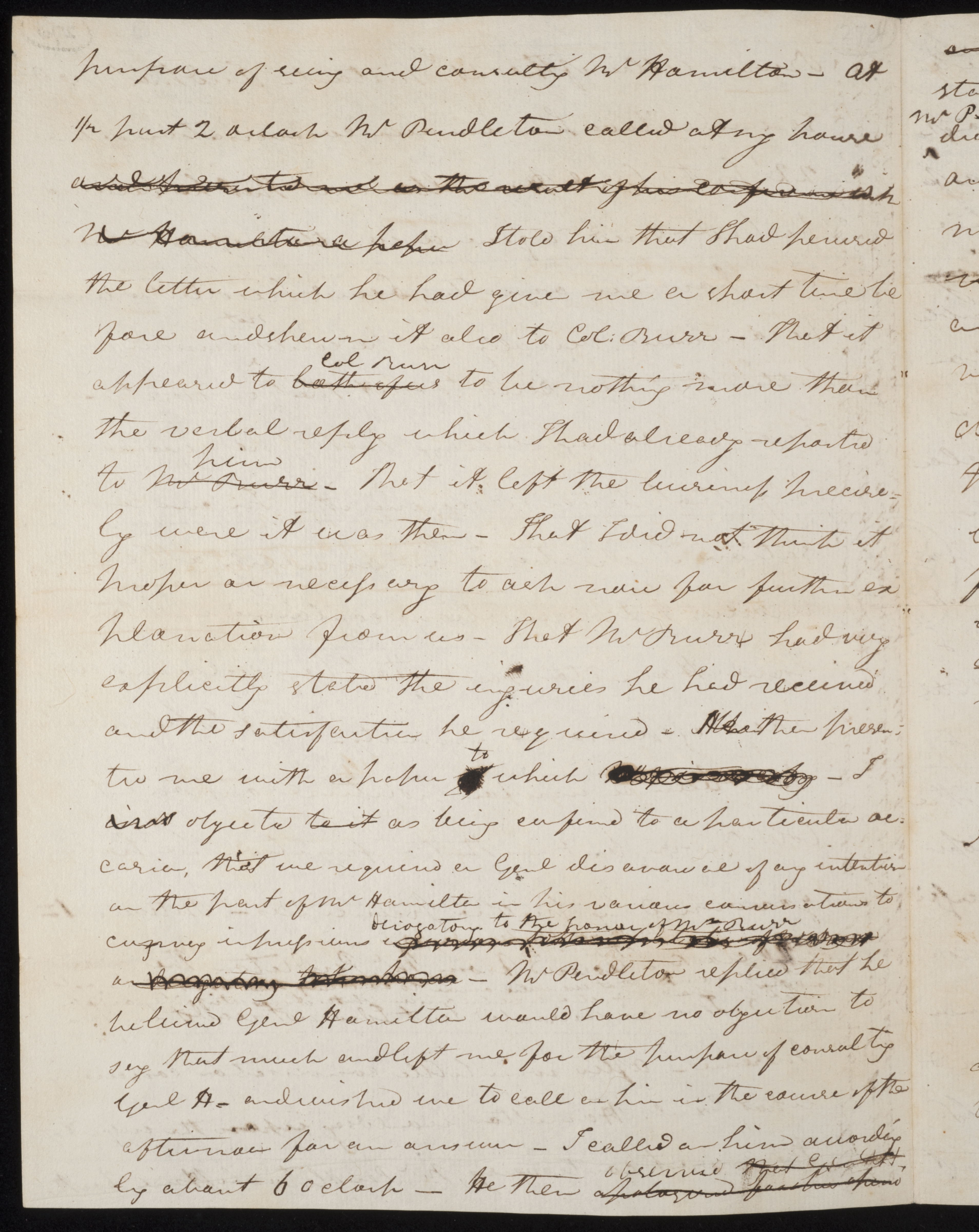 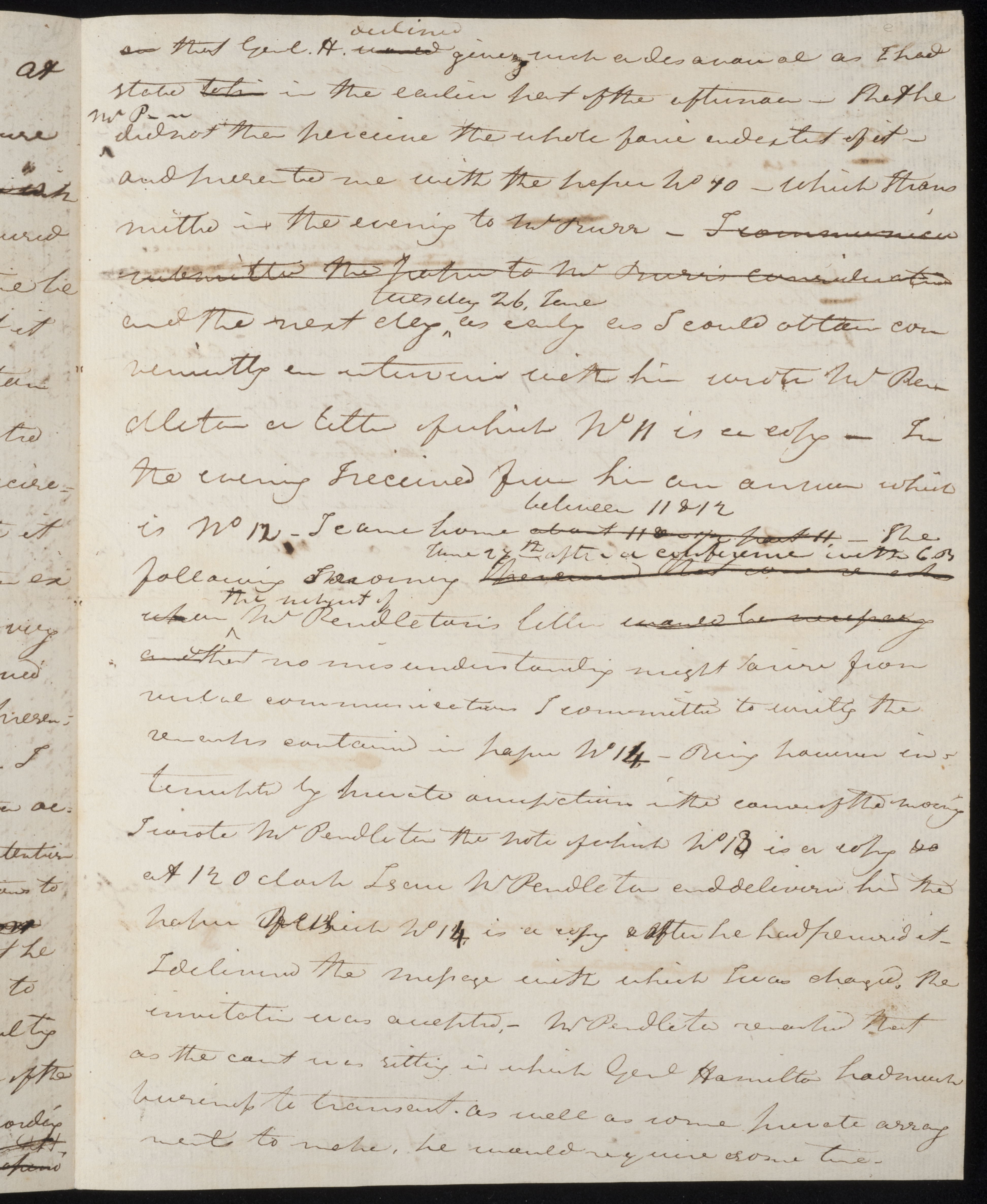 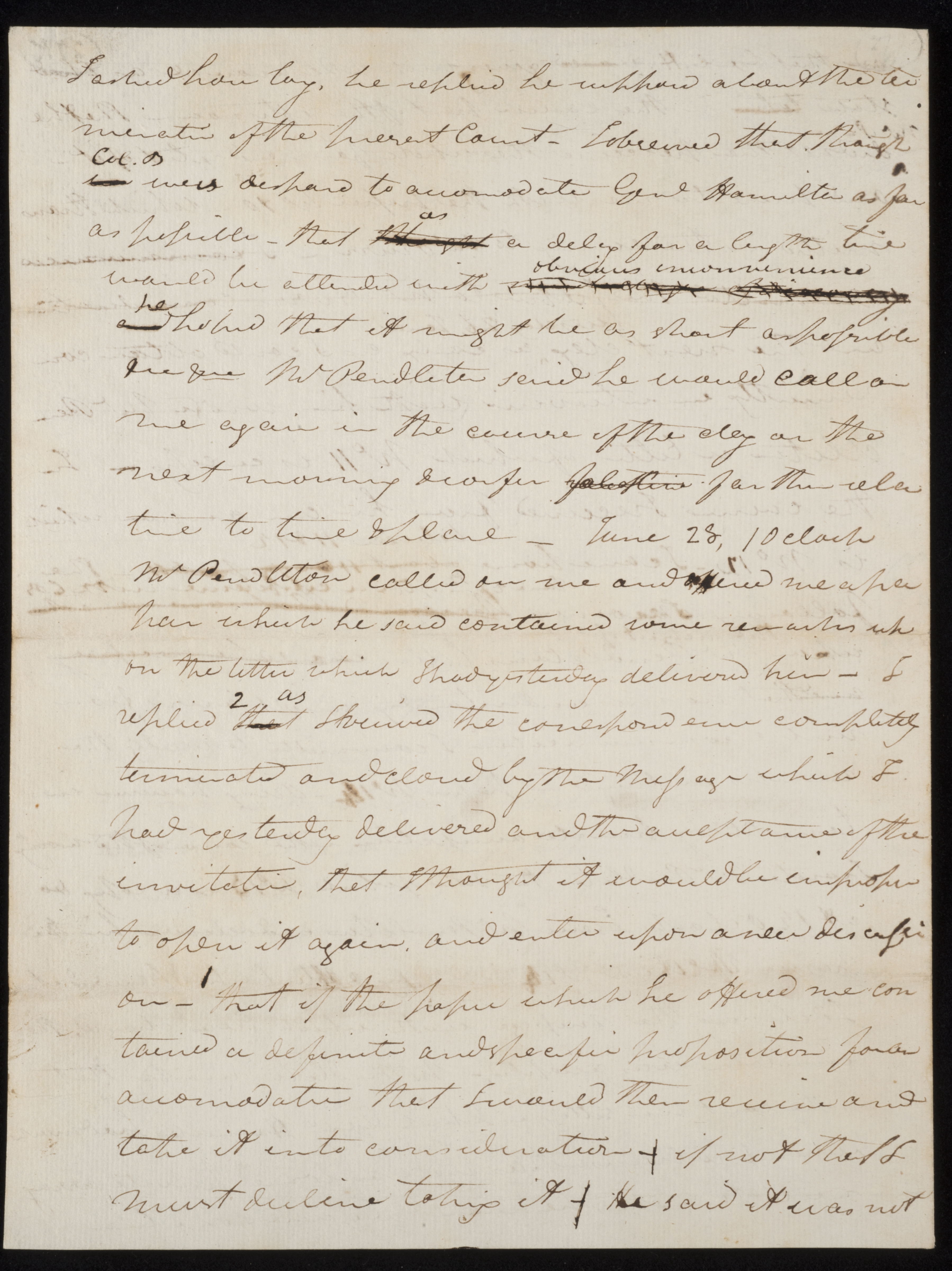 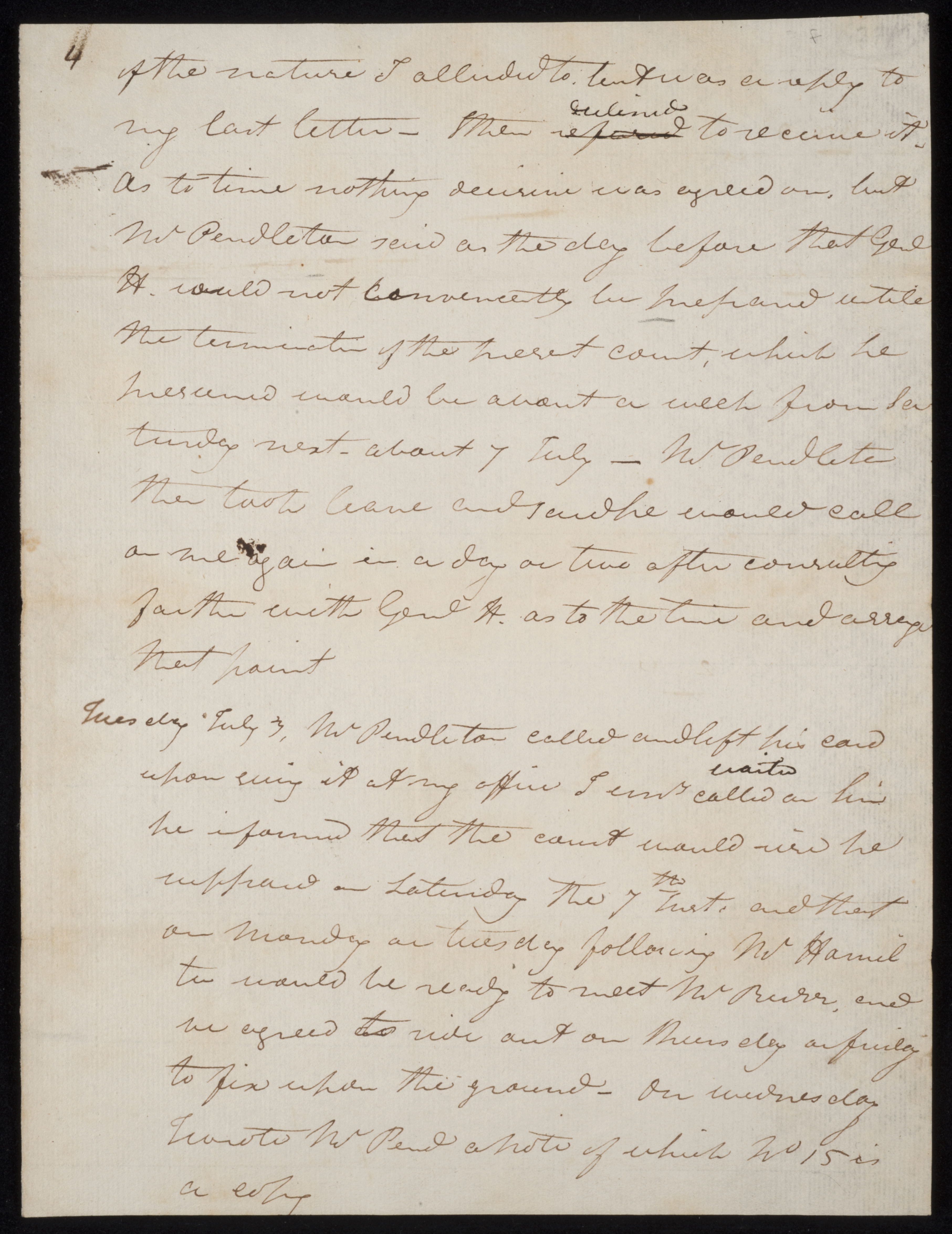 1804 June 18. Delivered a copy of the letter on the other side written to Genl. Hamilton at 11 o’clock A. M. Genl. Hamilton upon examining the letter alluded to by Col. Burr, & signed C. D. Cooper, observed that he did not think that the publication in question authorized Col. Burr to call upon him in the way he had; that its language and its references were so general and undefined that he did not perceive how he could with propriety return a specific answer to Col. Burr’s letter. That if Mr. Burr would refer to any particular expressions he would recognize or disavow them. I remarked that I did not think Mr. Burr was prepared to point out any specific & exceptionable language that had been used by him, Mr. Hamilton, but that the publication of Mr. Cooper evidently alluded to expressions made by Mr. Hamilton derogatory to the character and reputation of Mr. Burr, and that the laws of honor would justify Mr. Burr in enquiring of any gentleman whether he had uttered expressions that imparted dishonor. Mr. Hamilton said that he did not think my position correct, but that he would examine the publication in question and return me an answer in the course of the day.

On Wednesday morning I saw Genl. Hamilton in Court. He told me that I should be furnished with an answer to Col. Burr’s letter in the course of the afternoon. I assented very readily to the delay. I remained at home most of the afternoon. At 8 o’clock I went out and during my absence the letter of which No. 2 is a copy was left at my house. I delivered the same to Col. Burr on the morning of Thursday the 21st Instant. In the evening of this day I received a letter form Col. Burr enclosing one intended for Genl. Hamilton. The following morning, Friday, June 22, I called on Col. Burr and at 12 o’clock or thereabouts, I delivered to Genl. Hamilton a letter of which No. 3 is a copy.

Genl. Hamilton perused it, and said it was such a letter as he hoped not to have received. That it contained several offensive expressions, and seemed to close the door to all further reply. That he had hoped that the answer he had returned to Col. Burr’s first letter would have given a different direction to the controversy. That he thought Mr. Burr would have perceived that there was a difficulty in his making a more specific reply and would have desired him to state what had fallen from him that might have given rise to the inference of Dr. Cooper. He would have done this frankly and believed it would not be found to exceed the limits justifiable among political opponents. If Mr. Burr should upon the suggestion of these ideas be disposed to give a different complexion to the present discussion that he was perfectly willing to consider the last letter as not delivered. But if that was to be the only communication he was to receive that he could make no reply and that Mr. Burr must pursue such course as he should deem most proper. At the request of Mr. Hamilton I replied that I would detail these ideas to Mr. Burr. But it appeared to me that the correspondence had far advanced towards a determination. That his answer to Col. Burr’s first letter appeared to me not to have left much room for discussion. That it appeared to me if in that letter he had introduced the idea (if it was a correct one) that he could recollect the use of no terms that would justify the construction of Dr. Cooper. That it would have opened a door for accommodation. Mr. Hamilton then repeated the same objections to this measure which were stated in substance in his first letter to Mr. Burr.

In the afternoon of this day I reported to Col. B. at his house out of town the above conversation, and promised to call on him again in the evening for his further instructions. I was detained in town this evening by some private business, and did not call on Col. Burr according to appointment.

Tuesday. July 3. Mr. Pendleton called and left his card. Upon seeing it at my office, I immediately called on him. He informed that the Court would rise he supposed on Saturday, the 7th Inst. and that on Monday or Tuesday following Mr. Hamilton would be ready to meet Mr. Burr, and we agreed to ride out on Thursday or Friday to fix upon the ground. On Wednesday I wrote Mr. Pend. a note of which No. 15 is a copy. I called on Mr. Pendleton and stated that after my interview with Genl. H. on Friday, I had reported to Col. B. that Genl. H. would make no reply to his letter of the 21st, that I then received from Col. B. a communication for Genl. H. predicated upon that reply, that agreeable to appointment, I had seen Genl. H. at 9 o’clock, & that he supposed I had somewhat misunderstood him, and wished me to call on him, Mr. P., for a written reply which had been left with him.