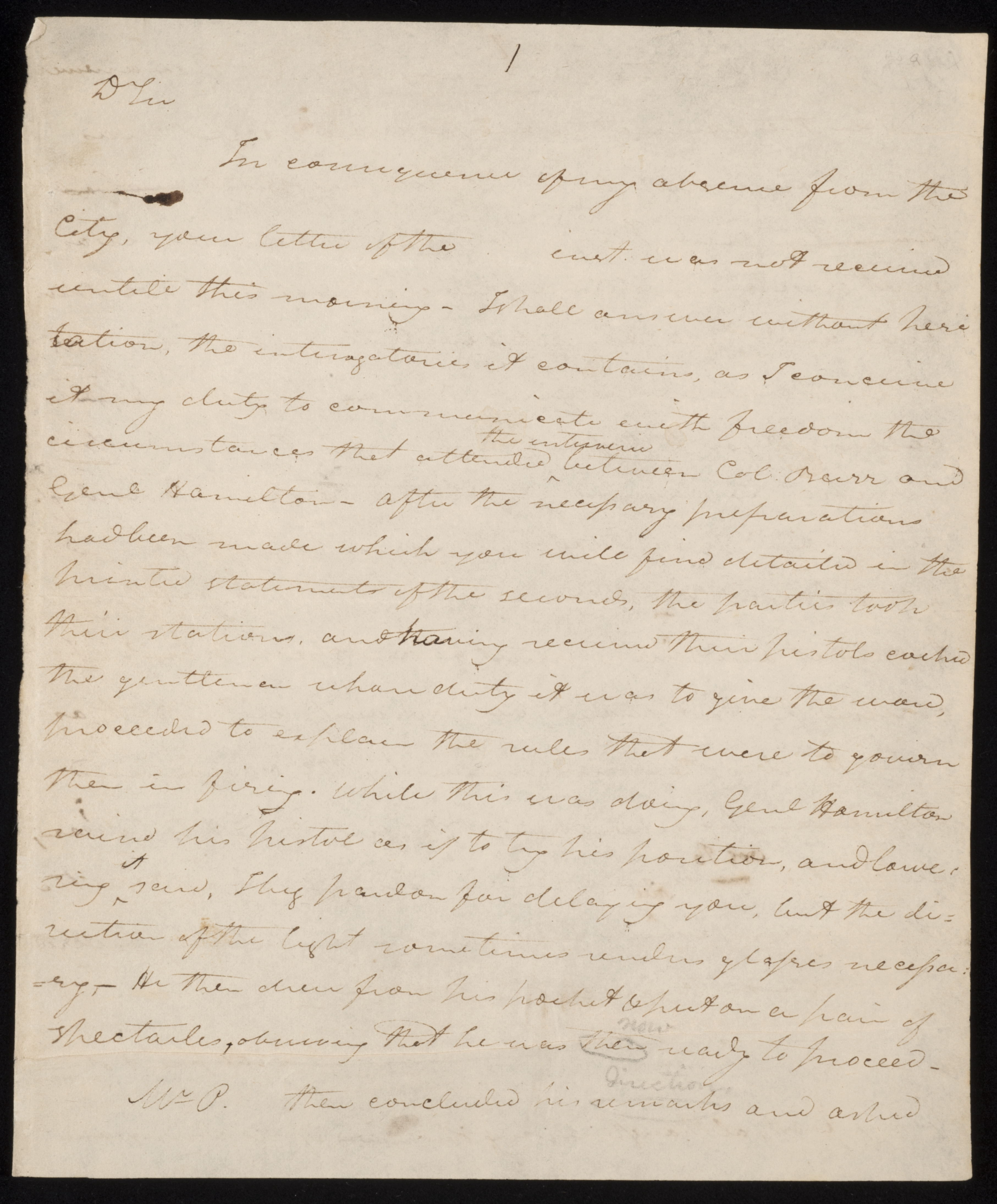 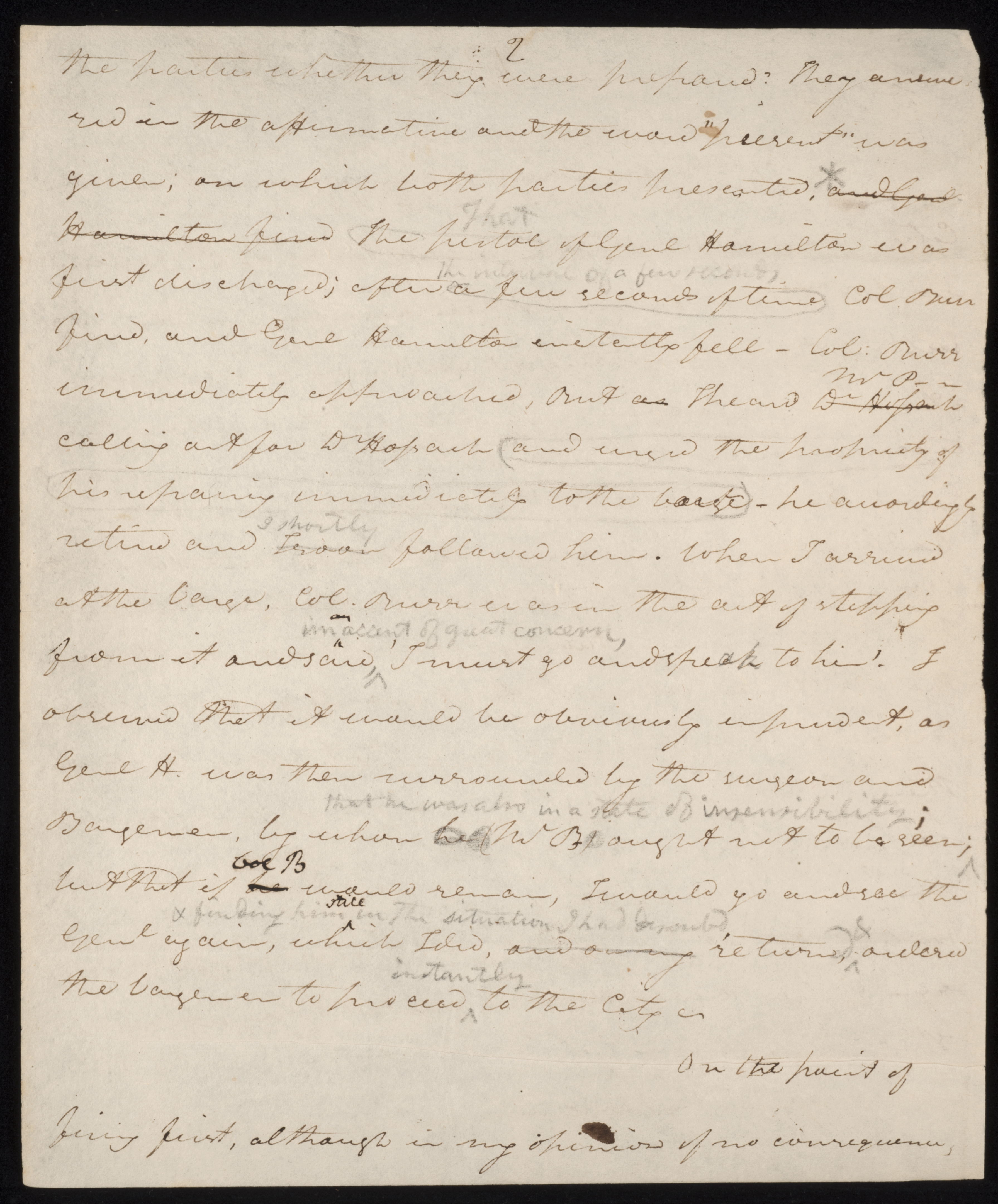 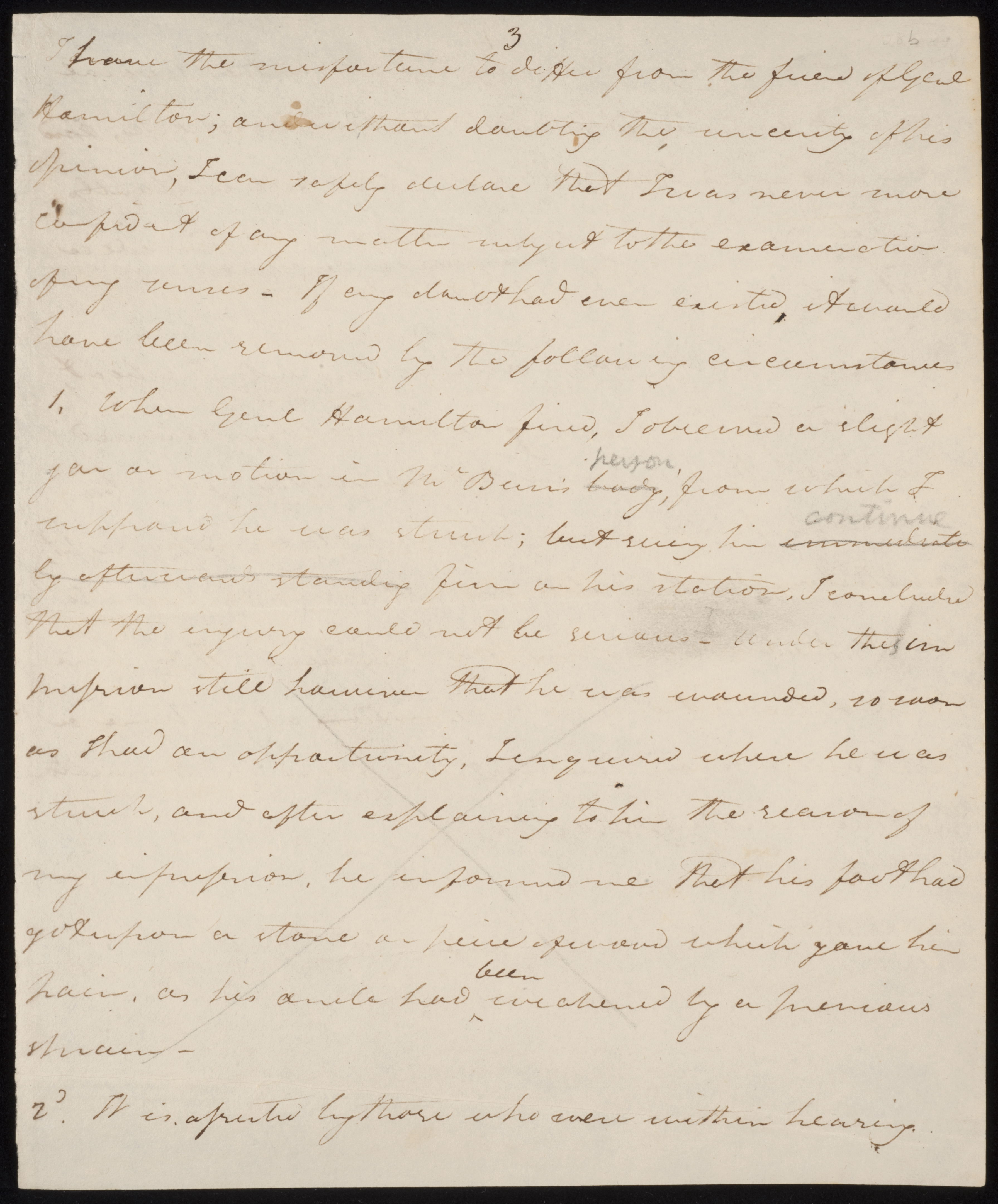 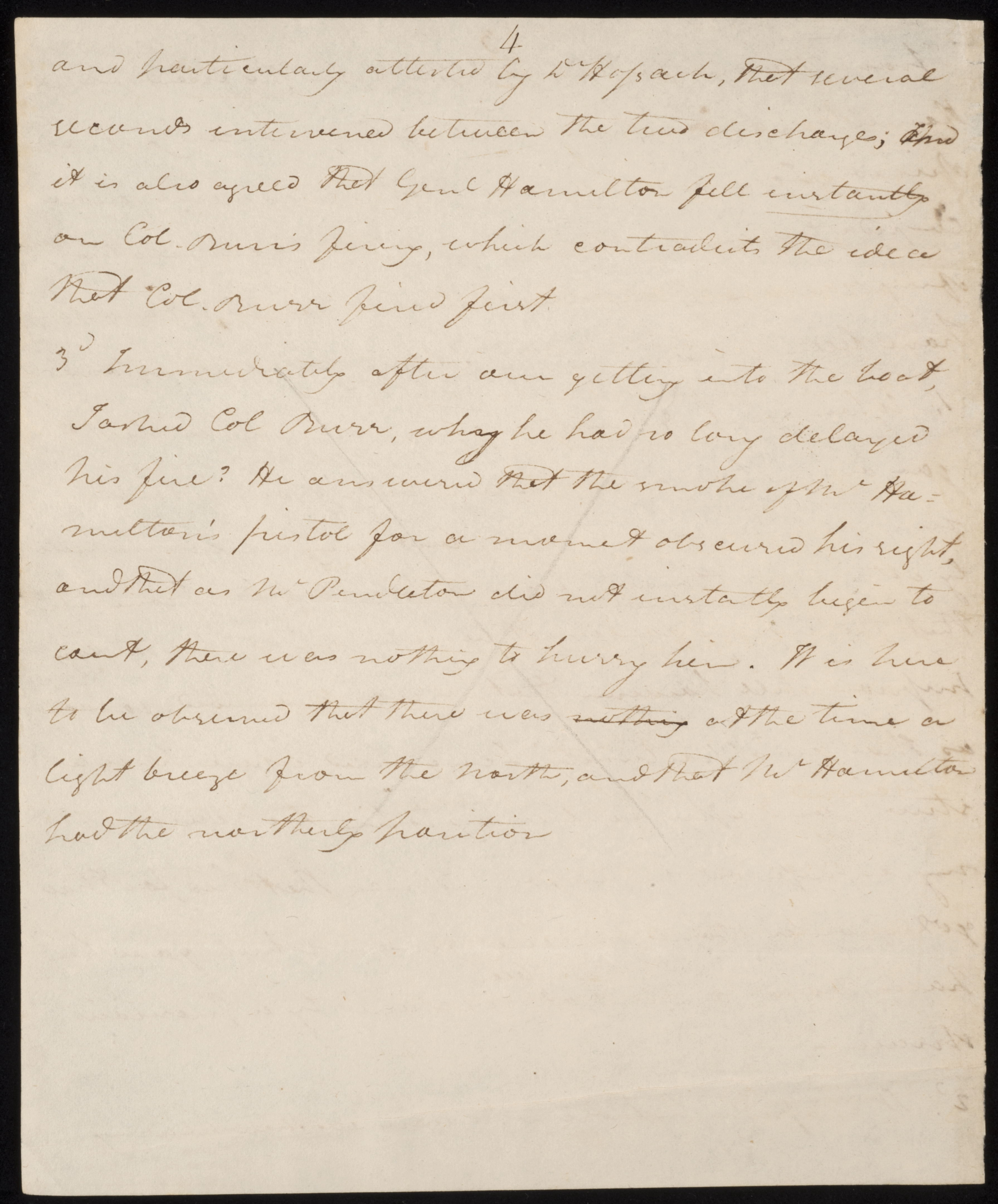 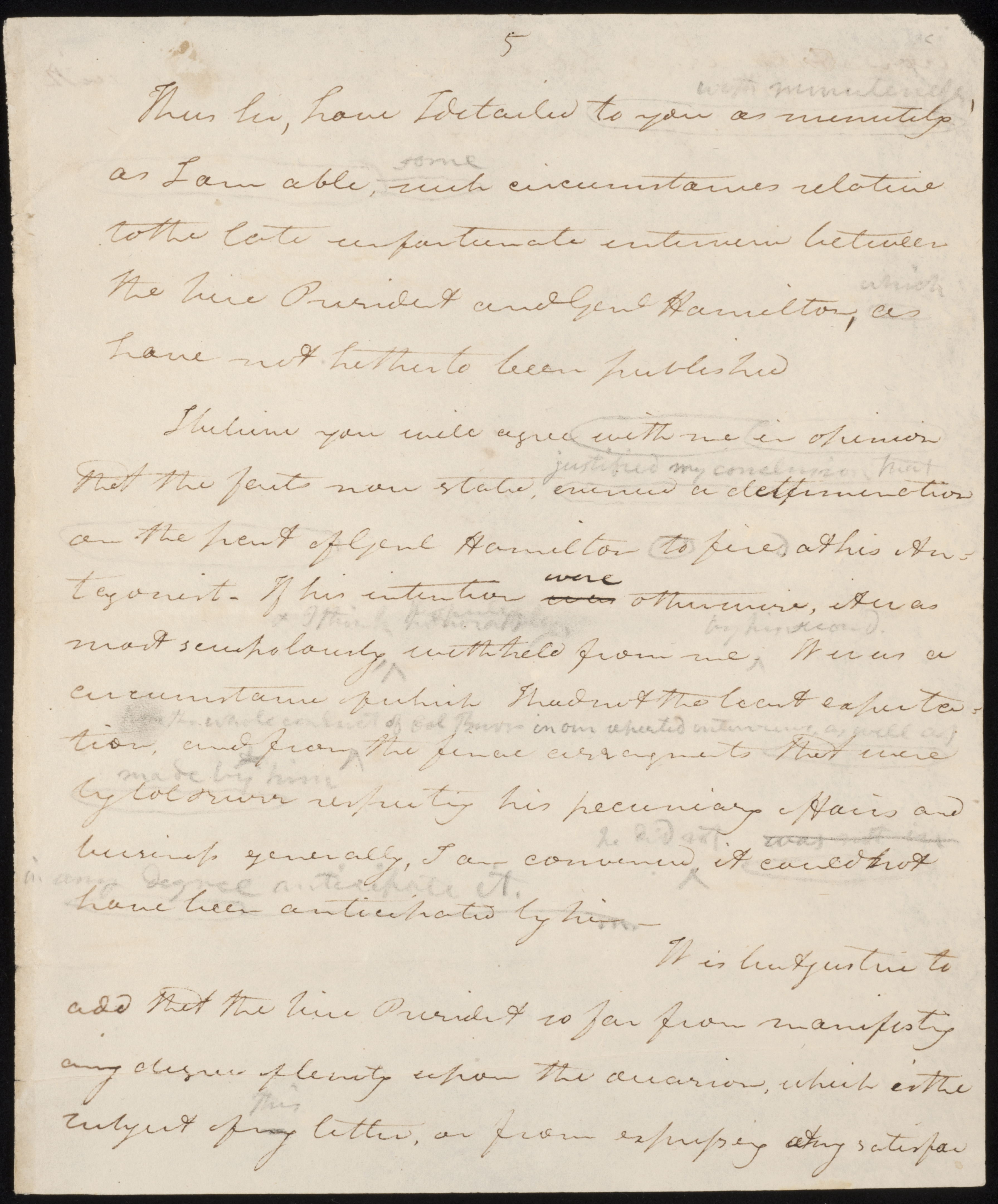 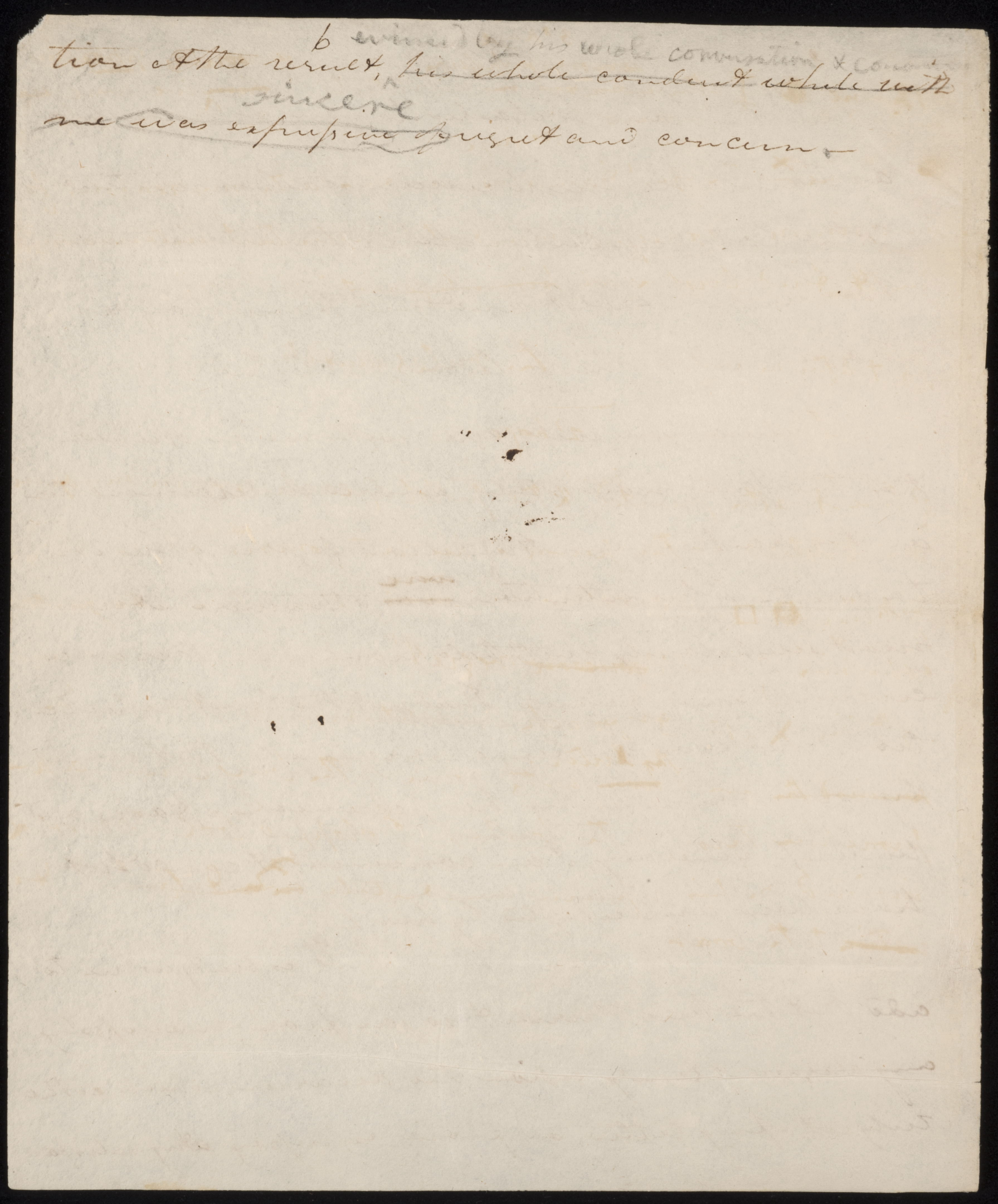 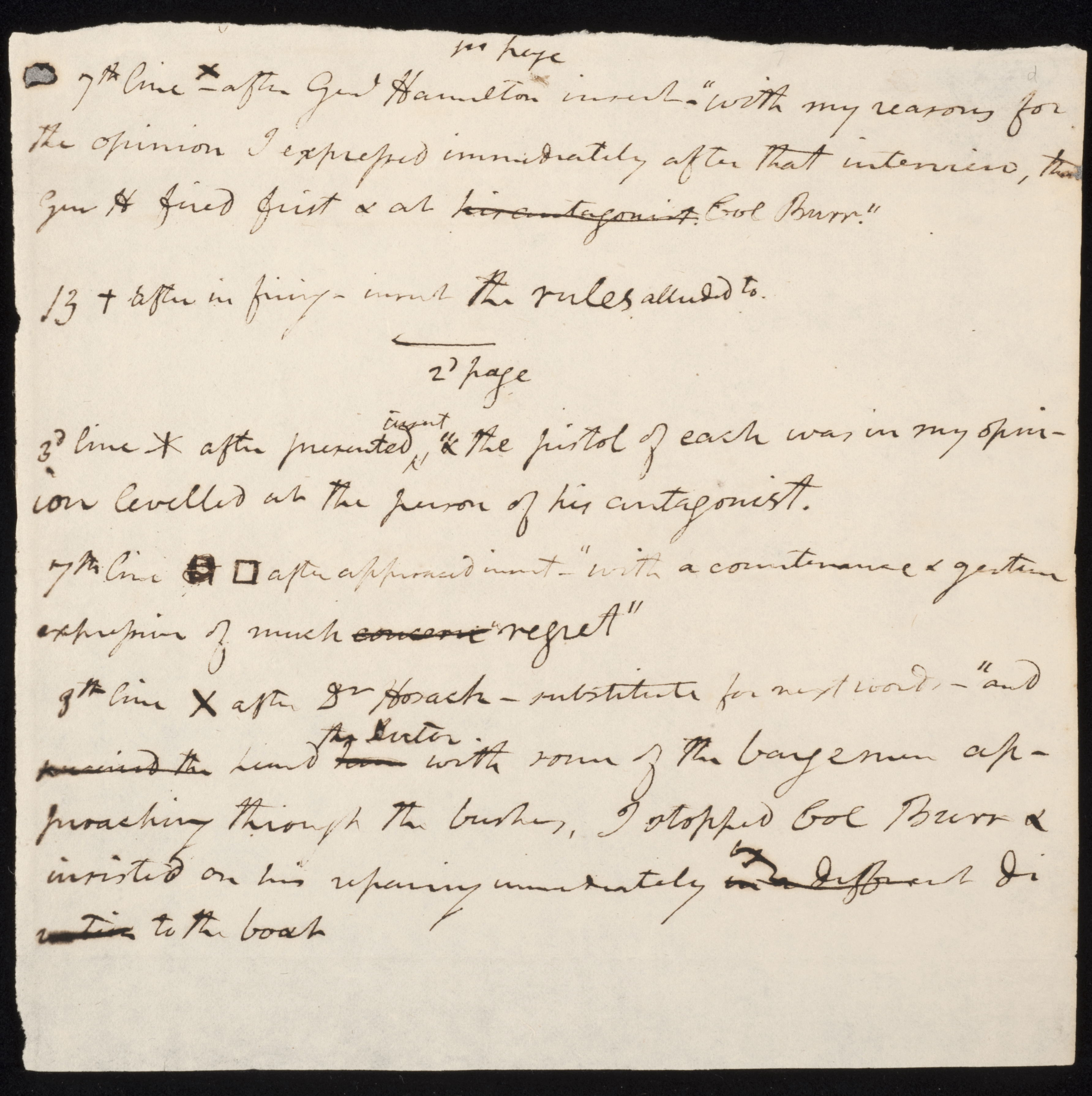 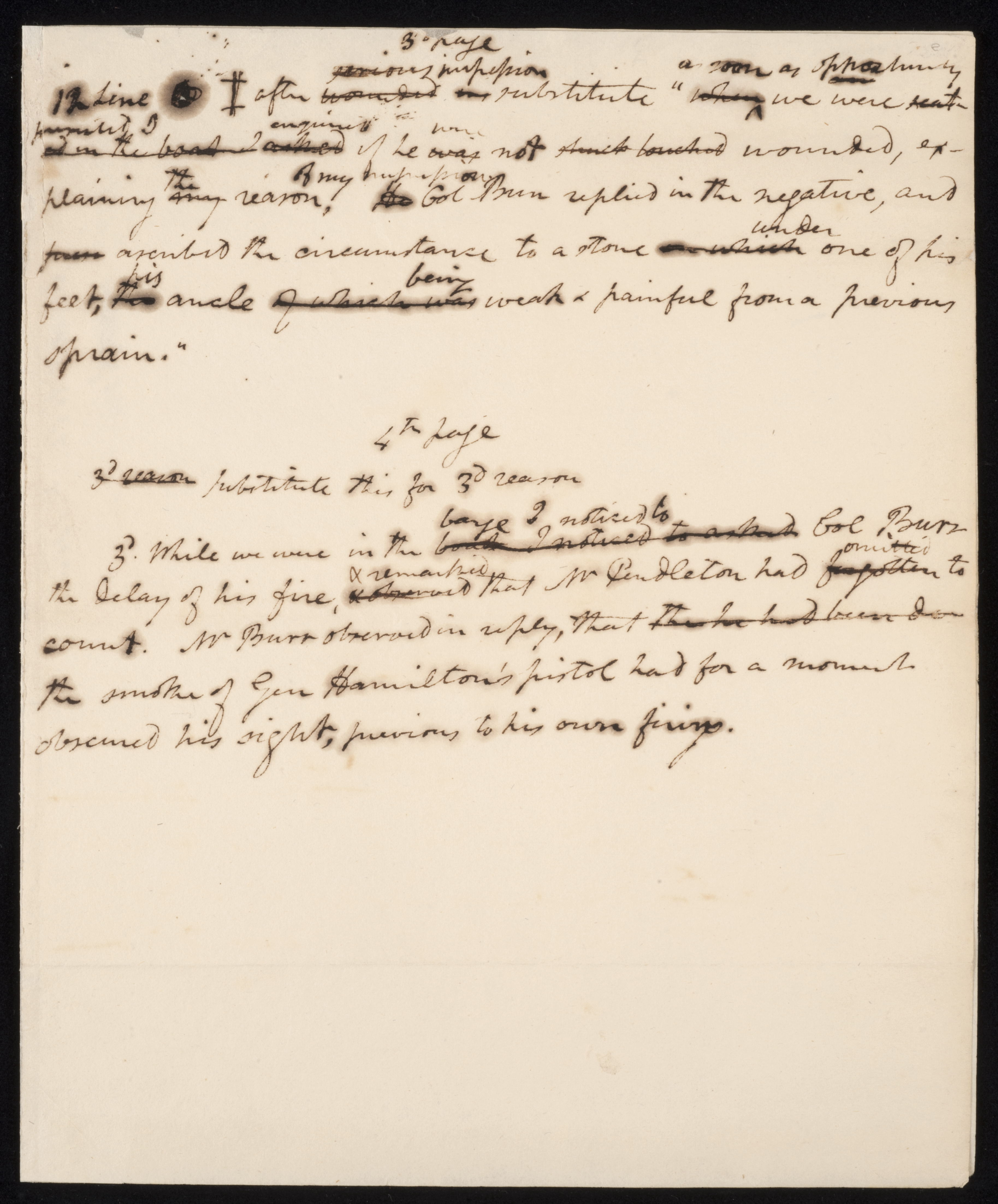 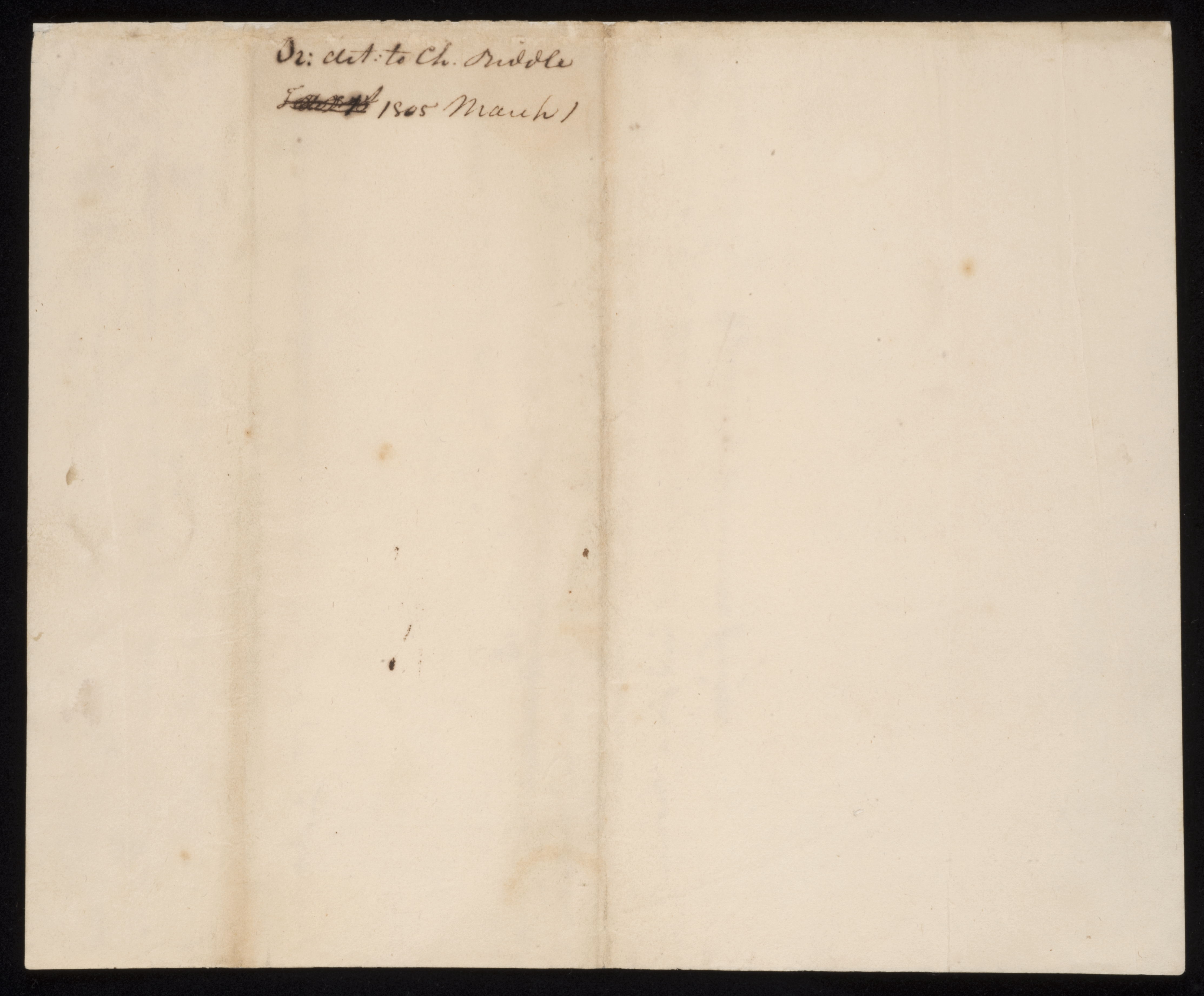 In consequence of my absence from the city, your letter of the inst. was not re- ceived until this morning. I shal answer without hesitation, the interogatories it contains, as I conseive it my duty to communicate with freedom the circumstances that attended the interview be- tween Col. Burr and Genl. Hamilton. After the necessary preparations had been made which you will find detailed in the printed statement of the seconds, the parties took their stations and having received their pistols cocked, the gentlemen whose duty it was to give the word, proceeded to explain the rules that were to govern them in firing. While this was doing, Genl. Hamilton raised his pistol as if to try his position, and lowering it said, I beg pardon for delaying you, but the direction of the light sometimes renders glasses necessary. He then drew from his pocket & put on a pair of spectacles, observing that he was now ready to proceed.

Mr. P. then concluded his directions and asked the parties whether they were prepared? They answered in the affirmative and the word “present” was given; on which both parties presented. That of Genl. Hamilton was first discharged; after the interval of a few seconds, Col. Burr fired, and Genl. Hamilton instantly fell. Col. Burr immediately approached. But as I beard Mr. P. calling out for Dr. Hossack and urged the propriety of his repairing immediately follwed him. When I arrived at the barge, Col. Burr was in the act of stepping from it and said, in an accent of great concern, “I must go and speak to him.” I observed that it would be obviously imprudent, as Genl. H. was then surrounded by the surgeon and Bargeman, by whom was Mr. B. ought not to be seen; that he was also in a state of insensibility; but that if Col. B. would remain, I would go and see the Genl. again, which I did, & finding him still in the situation I had described, returned & ordered the bargeman to proceed instantly to the City.

On the point of firing first, although in my opinion of no consequence, I have the misfortune to differ from the friend of Genl. Hamilton; and without doubting the sincerity of his opinion, I can sagely declare that I was never more condifent of any matter subject to the exampination of my senses. If any doubt had ever existed, it would have been removed by the follow- in circumstances:

1. When Genl. Hamilton fired, I observed a slight jar or motion in Mr. Burr’s person, from which I supposed he was struck; but seeing him continue firm on his station, I concluded that the injury could not be serious.

2d. It is asserted by those who were within hearing and particularly attested by Dr. Hossack that several seconds intervened between the two discharges; and it is also agreed that Genl. Hamilton fell instantly on Col. Burr’s firing, which contradicts the idea that Col. Burr fired first.

3d. immediately after our getting into the boat I asked Col. Burr why he had so long delayed his fire? He answered that the smoke of Mr. Hamilton’s pistol for a moment obscured his sight, and that as Mr. Pendleton did not instantly begin to count, there was nothing to hurry him. It is here to be observed that there was at the time a light breeze from the North, and that Mr. Hamilton had the northerly position.

Thus, sir, have i detailed to you with minuteness, some circumstances relative to the late unfortunate interview between the Vice President and Genl. Hamilton, which have not hitherto been published.

I believe you will agree that the facts how stated justified my conclusion that Genl. Hamilton fired at his antagonist. If his intention were otherwise, it was most scrupulously & I think properly withheld from me by his second. It was a circumstance of which I had not the least expectation, and from the whole conduct of Col. Burr in our repeated interviews as well as the final arrangements made by his respecting his pecuniary affairs and business generally, I am convinved he did not in any degree anticipate it.

7th line, x after Genl. Hamilton insert “with my reasons for the opinion I expressed immediately after that interview, that Genl. H. fired first & at Col. Burr.”

13 after in firing insert the rules alluded to.

3d line after presented insert “the pistol of each was in my opinion levelled at the person of his antagonist.”

7th line. after approached insert “with a countenance & gesture expressive of much regret.”

8th line. x after Dr. Hosack substitute for next words “and heard the doctor with some of the bargemen approaching through the bushes, I stopped Col. Burr & insisted on his prepairing immediately to the boat.